Ceviche opening a new Shoreditch restaurant in the Autumn 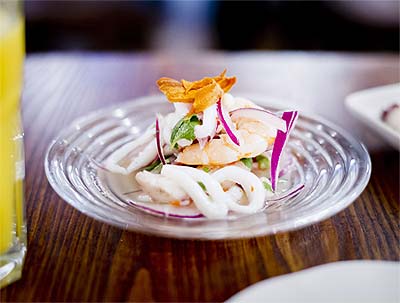 The trend for Peruvian food was huge this year and looks set to continue with the news that Ceviche will be opening a second restaurant in East London. The new place in Shoreditch will feature both a bigger Ceviche Bar and Pisco Bar and a dedicated BBQ for sizzling anticucho skewers. It will also do take away and entertainment in the form of live music and DJs.

Ceviche owner Martin Morales is also putting his name to a new cookbook. Ceviche: The Peruvian Cookbook will feature over 100 recipes including signature dishes such as Don Ceviche and Lomo Saltado and covering updated Peruvian classics like Peruvian Corn Cake and cocktails such as the Soho Pisco.

And if all that isn't enough to keep the team busy Martin (who was once a DJ) is also releasing the first in a series of collectable 7-inch singles through their own Tiger’s Milk Records independent label. Releases will include hard to find collectable re-issues as well as music which pays tribute to Peruvian food.

“Many of the songs we play at Ceviche are from the 60s and 70s and you can only get them on vinyl 7-inches that cost around £100 each," says Martin. "Customers have been asking us how they can get hold of these. So we are making these available in their original 7-inch format and in a beautiful package that pays respect to their heritage.