Casual and fun Cinnamon Bazaar to open in Covent Garden 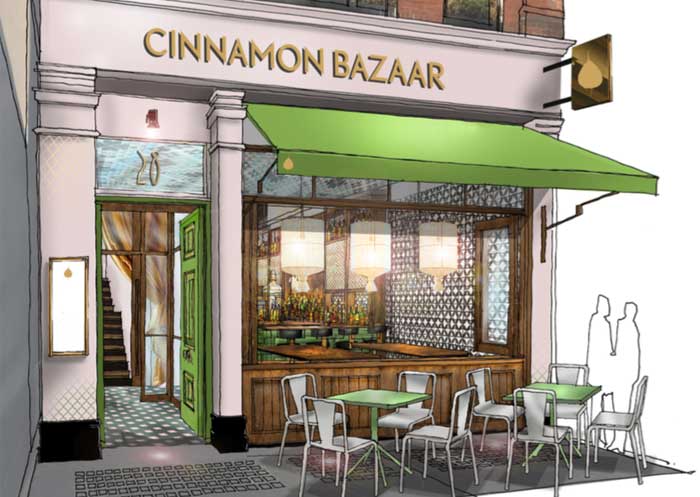 If you’ve always dreamed of visiting Westminster’s majestic Cinnamon Club, but haven’t yet found the right special occasion/outfit/windfall to revel in all its old world plushness, you’re in luck. Coming soon to Covent Garden is another addition to the Cinnamon family, the Cinnamon Bazaar.

Setting itself apart as a far more relaxed restaurant than its Cinnamon counterparts, the Bazaar will be offering all-day dining breakfast to dinner, and excitingly, an expected average spend of £20pp. In a nod to the West End’s vibrant nightlife, the bar will also be much bigger than seen in its sister restaurants, while the two-storey dining room itself will decorated in bold, colourful prints and aglow with bright hanging lanterns.

Breakfast options will include fluffy paratha flatbreads, while those after a light bite or heading down for lunch will be able to order dishes like Kolkata spiced cod, or Indo-Chinese stir-fried chicken with chilies. Meanwhile, for the evening there’ll be more serious dishes on offer, like the Chettinad lamb or Kerala boatman-style smoked haddock curry.

High Chai - an Indian take on British tea time - will be served alongside a selec lassis. Those after something stronger will be able to enjoy offerings from the cocktail bar, which will have a heavy focus on gin and botanicals.

Founder Vivek Singh says the Bazaar is a more “casual and fun format” than his other restaurants. “We want guests to feel it’s a place they can come and relax at any time of the day whether eating, drinking or just meeting up with friends for a chat over a chai,” he said.

Cinnamon Bazaar will open in Covent Garden on 28 November, on 28 Maiden Lane, Covent Garden, WC2N 7JS. There's a soft launch from 28-30 November with 50% off food and you can book on their website. After that, it’ll be open from Monday-Saturday 9am-midnight, and Sunday 10am-11pm.