Casse-croûte opens on Bermondsey Street with Jose GM in charge 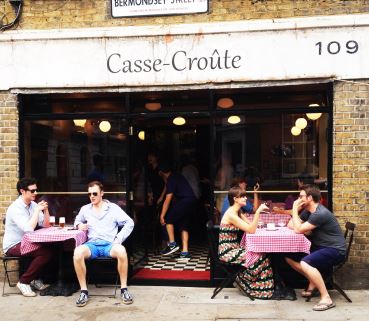 It's no coincidence that the new French bistro opening in Bermondsey Street right opposite Jose is the brainchild of Jose's GM Herve Durochat.

Casse-croûte is a tiny 20 seater French Bistro which has been set up by Durochat and Alexandre Bonnefoy (ex-assistant head sommelier Arts Club). In the kitchen are Sylvain Soulard - former head chef at Morgan M and sous chef Romain Perrolaz Boulandet (formerly of Saturne Table Cave in Paris) so you can expect dishes like tete de veau, rillettes, boudin noir, macarons, tarte aux fraises and clafoutis.

"It has been a dream to open a little French neighbourhood bistrot," Durochat told Hot Dinners, "and now the dream comes true. My good friends Alexandre and Sylvain Soulard are my partners in the business.

He describes Casse-croûte as "a restaurant with authentic French food. Very short French wine list and an atmosphere and dining experience that will be as good as Chez Paul restaurant (rue de Charonnes) in Paris."

The name of the bistro was inspired by their idea of "eating whenever you want, when you feel hungry, at the counter, between two chairs, with your hand, with the point of your knife, as long as you satisfy your palate."

The menu will change every day with a simple three starters, three mains and three desserts as well as one special every night (a dish for two). They'll also offer a selection of charcuterie and cheeses. Looking at today's menu (right) dishes range from £4.50 to £11.50 in price. Opening hours will be at breakfast (9am) where you can get a breakfast croissant, pain au chocolat, tartine of French baguette and then from 12pm through to last orders at 10pm, closing at 11pm.

Casse-croûte officially opens at 109 Bermondsey Street, London SE1 3XB on Monday 22nd of July from 9am (although they are apparently accepting some bookings this week). To make a reservation call 020 7407 2140.