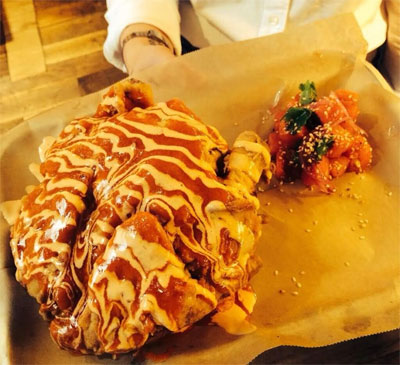 He's been popping up all over the place with Disco Bistro but now Carl Clarke is settling down in Dalston with a brand new fried chicken (and sour cocktails) restaurant, Chick n Sours.

Clarke will be back in the kitchen in Dalston too (and in charge of the soundtrack).

What you need to know about Chick n' Sours

It all revolves around chicken, naturally (free-range herb-fed chicken from Pilmoore Grange Farm in Yorkshire). That chicken will be served up in two styles, from £7. There's the House Fry which is finished off with Carl’s ”seaweed crack” seasoning & served with an Asian-inspired pickled watermelon & peanut salad. Then there's a monthly changing Guest Fry which will be mainly based on other countries’ interpretations of fried chicken. So there are Carl's versions of Chinese General Tso and Kung Pao. And the Fried Butter Chicken with Jhal Muri sprinkles sounds very enticing. You can also expect hot wings and a chicken roll on the menu too.

The veg sounds pretty special too. There will be Chinese steamed turnip cake with soy pickled shiitake mushrooms and which will have a similar coating to the fried chicken. Plus sides from £3 include sprouting broccoli, seaweed mayo & pickled green beans, Laksa peas & coconut cashews, Grilled kimchi with Japanese mayo & crispy chicken skin and Coal grilled corn with Berkswell cheese, lime & coriander.

Special sparkling wine. On the list, compiled by Zeren Wilson, is a sparkling German Riesling, that's not listed anywhere else in the UK.

And finally - the sours. These will also come in house and guest variety, from £6. As Clarke puts it: "“the marriage of sour cocktails to fried chicken is like vinegar to chips. The sours cut through the richness of the coating leaving your mouth singing and dancing for more.” They're by Sam Dunne who's previously been at Rotary and Milk & Honey. The sour bases will be include tequila, bourbon, pisco, and more with tinctures and syrups made in-house.