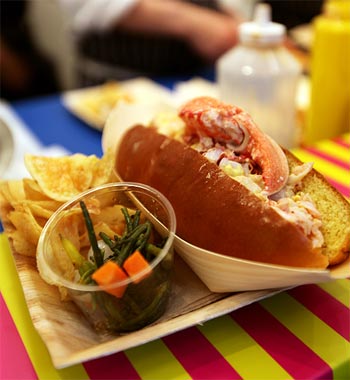 He's only just finished his Disco Bistro residency at the Rising Sun, but Carl Clarke's already gearing up to launch his next venture.

He'll be bringing his former pop-up Rock Lobsta to Mayfair club Mahiki as their first restaurant. This time Rock Lobsta's planned as a permanent addition to Mahiki, with even a later expansion to Mahiki in Dubai mooted. It'll accept both bookings and walk-ins, seating 60 on the club's first floor.

The menu will be familiar to those who frequented Clarke's previous restaurants - a mix of fresh and "dirty" food. So that means Cornish lobsters alongside a mix of 40 day aged Rib Eye steak, gourmet burgers, Rock Lobsta rolls and fried shrimp Po Boy's.

For those clubbers who fancy something lighter, there's a raw bar including fresh oysters, razor clams and spider crabs legs.

On top of this, there will be ice cream sundaes and gelatos for dessert plus loads of Mahiki cocktails to go alongside.