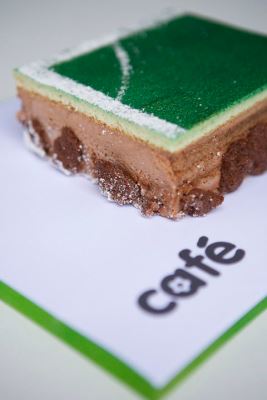 We're not saying that it'll be everyone's cup of tea (or burger and chips) but there's bound to be a lot of interest from footie fans in the new restaurant opening at Westfield Stratford next week. Café Football is the first restaurant to be launched by Gary Neville and Ryan Giggs.

They've brought in two Michelin star chef Michael Wignall to help create the menu. Dishes will feature their take on a pot noodle and a range of family-friendly food, as well as four burgers including the Boss - dry aged beef, scotch bonnet pulled pork, lime mayo and Asian slaw (£12), while desserts include the Half Time Orange, Pistachio Turf (pictured) and a Melting Chocolate Football. There's also Karren Brady's Match Day Classic - which turns out to be pie, mash and liquor with chilli vinegar (£13.95).

The drinks list will feature a large selection of wines and cocktails with drinks including a Red Devil. We confidently predict no football pun will go unused.