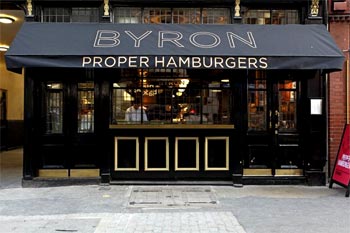 It would be fair to say there are a few burger fans amongst Hot Dinners' readers, so a lot of you'll probably be way too interested than is healthy to hear of a new festive burger about to hit London.

Byron has just announced that it'll be putting on a special Christmas burger - the Triple Cheesemas. This festival of meat in a bun comprises two 6oz hamburgers, onion and spicy burger sauce in a glazed bun as well as "the holy trinity of melted American cheese, Emmenthal & Monterey Jack".

We don't have any pictures of the burger as yet, but will bring them to you (along with a taste test) as soon as we can.

Triple Cheesemas will be available at all Byron restaurants throughout December, priced at £11.95.