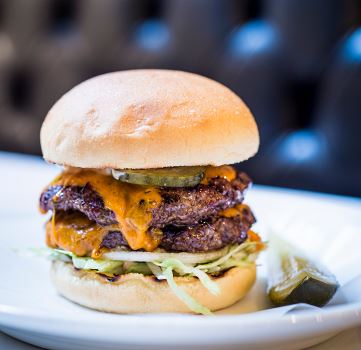 With no less than three new burger places opening in London next week, the onus is on existing burger joints to keep people excited about what they're offering. And Tom Byng, founder of Byron, certainly isn't one to rest on his laurels.

Following a trip to LA where he apparently scoffed more than 30 burgers over a three-day period, he's come up with a limited edition burger which will be on the Byron menus this summer. The Big B is a Los Angeles-inspired double cheeseburger, served in a potato bun with sliced pickles and onion and burger sauce.

Sounds interesting - particularly as one of the best bits for us about the Shake Shack burger is its potato bun. The Big B bun is apparently "a specially developed potato bun that’s softer, chewier and slightly sweeter than Byron’s usual".

The burger is the creation of Byron's chef Fred Smith who, you may recall, made a name for himself with his obsessive quest for the perfect burger when he was in charge at the Admiral Codrington. You can read more about the Big B's genesis over at the Burgerac blog.

The Big B will be available at all Byron restaurants from July 2nd – 26th August inclusive, priced at £9.50.