Byron Burger Club's third night will be a Patty Meltdown 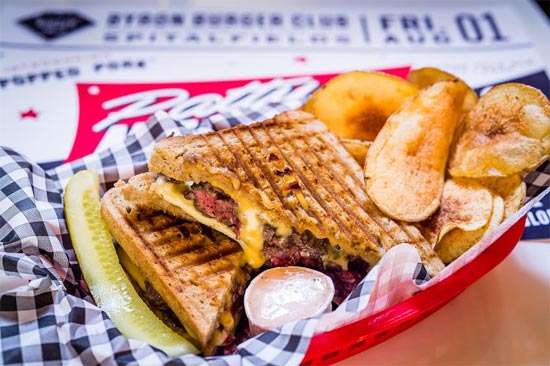 Tickets for the third Byron Burger Club night are going on sale tomorrow for a one day only event in Spitalfields which sounds like a doozy. Byron’s Head Chef Fred Smith will be serving up his own take on the Patty Melt - described as a "mutant offspring of a cheese toastie and a hamburger".

Fred's version will consist of two slices of buttered rye bread with caraway seeds sandwiching a loosely-ground beef patty topped with slow-cooked red onions and Swiss cheese, all grilled in a heavy-duty griddle. It will be served with a pot of Russian dressing and seasoned crisps, as well as spiced popped pork to start, and a peanut butter and white chocolate blondie to finish.

Patty Meltdown tickets are £20 and include the full menu & a beer. Tickets go on sale tomorrow (11th July) here.