BYOB, small plates and summer vibes at Nest’s Summer in the Square pop-up

Written by Nancy Smallwood
Created: 26 May 2017 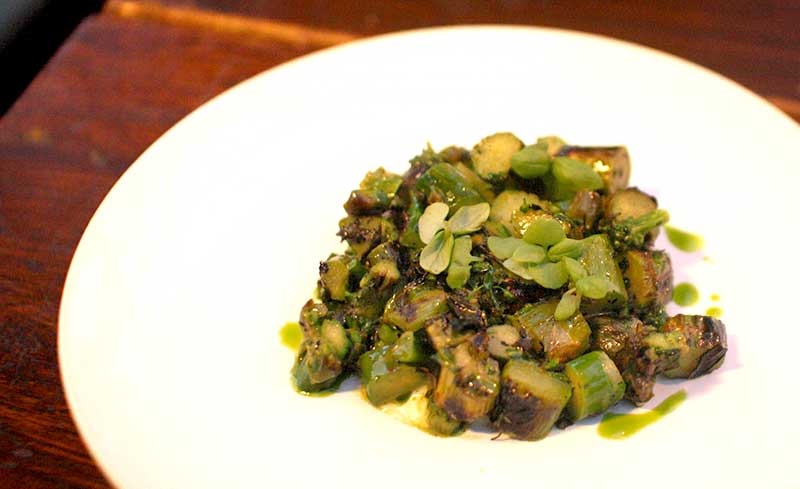 London couldn’t have been feeling less summery when Hot Dinners ventured out in an actual downpour to visit Nest: Summer in the Square, a popup in Moorgate last week (how quickly things change..).

The idea is that, now that warmer weather now has arrived, the small shack in the middle of Finsbury Square will be a haven of BYOB summery vibes, snacks and small plates. “Normally,” we were told by chef Toby, “the doors would be open, people would be playing football and drinking cocktails.”

Guests are invited to take a hand in making their own cocktails while saving a few bob, bringing their booze of choice with the option to buy a £10 bottle of Nest's home-infused cordial for mixing, including a tart rhubarb and ginger, a lemonade and a strictly-gin-only cucumber, lime and juniper concoction, which was our favourite. Otherwise, corkage is £2.50 per person.

We were treated to a handful of dishes off the May evening menu, which was heavy on the pork, as Nest use only one meat at a time when laying out this menu.

We started out with a crunchy rye with smoked cod’s roe and fennel, accompanied by some soda bread smeared with pork fat butter, the rendered fat mixed directly into the butter.

We really loved the croquettes - “basically everything you’d get in a ploughman’s lunch, but in a croquette" - which were packed with melting, gooey cheese and ham. We followed that with Stone Bass in Ham Broth, and finished with the Old Spot Jowl with Burnt Orange, with not only came with a big wodge of shredded cabbage but a more than generous helping of crackling (which everyone knows is the best bit).

We’d recommend getting two or three plates each, and definitely get a side of the smoky BBQ asparagus with cow’s cheese from Fen Farm.

Nest's Summer in the Square pop up is running until the end of June, then they head off to Gottwood Festival, Houghton Festival, and The Boathouse before finally finishing up at Nest on the Thames in Hammersmith this September.

When: Now until the end of June, Tuesday - Fridays