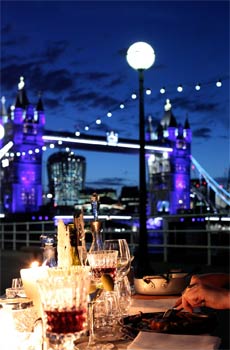 They all have great riverfront views, but next month four Thameside restaurants by Tower Bridge will go the extra mile to make the most of what diners can see from their tables.

As part of the Thames Festival (6-15th September) D&D’s Butler’s Wharf restaurants - Le Pont de La Tour, Cantina del Ponte, Blueprint Café and Butler’s Wharf Chophouse - will be taking part in a nightly electricity ‘blackout’. Each restaurant will be turning out the lights at 8.30pm during the ten days of the festival, allowing diners to enjoy unspoilt views of the Thames and a truly candlelit meal.

Each restaurant will serve a different three-course, ‘Blackout Menu’ over the ten days, with the highlight being the ‘Blackout Banquet’ a 40 metre, 140 seat banqueting table on the riverbank that will showcase a rotating menu of dishes from each establishment. Tickets cost £35 for three courses including an arrival drink and coffee - to book the banquet call 0207 940 1833.

With food and drink events designed to heighten the sensory experience of darkness by the river, including blind wine tastings and blindfold dinners as well as a special flambe menu at Le Pont de la Tour on September 11th, the Butler’s Wharf Blackout sounds like a pretty unique way to see the city in an entirely different light.

Read more about the event on their facebook page.