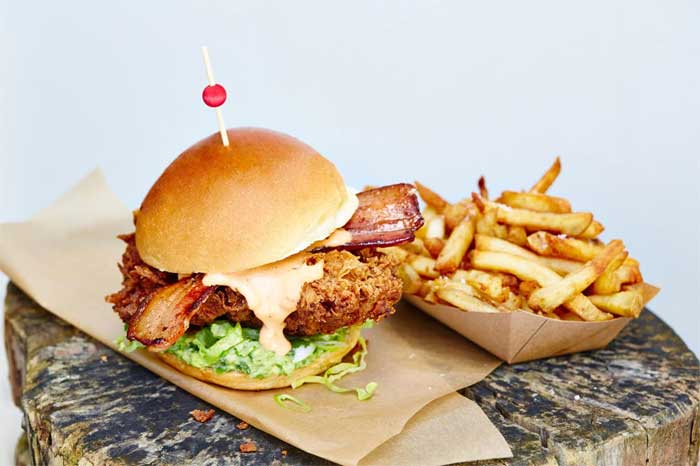 Even before we tried their amazing fried chicken at this year's Taste of London, there was a lot of buzz around Irish duo Garrett and Emer Fitzgerald of Butchies. So it's not at all suprising, just very pleasing, to learn that the street food duo are about to open their first bricks and mortar place.

The new Butchies' Hatch will open in Camden Market this month - expect it to build on the huge following they already have at their stall at Broadway Market every Saturday. If you're wondering what's different about this chicken shop, it may be down to the fact that these guys are cooking their chicken using a pressure fryer which apparently makes it super juicy.

As you'd guess, there's all manner of free-range chicken delights going on the menu with five chicken sandwich choices, all served in a soft butter-toasted bun. If you're wondering about the names, they're based on Garrett’s favourite TV characters from the 1980s and 1990s.

If you're heading there with a veggie friend, there's something for them too with The Margot - halloumi, guacamole & smoked chilli mayo (£7).

Sides will be twice-cooked fries (£3), cheese fries with red Leicester cheese dripping (£4) and there's an off-menu item you'll need to know about to order - hot wings in buffalo sauce and blue cheese dip (£6).

Butchies’ Camden Hatch opens on 21 September 2016 at Butchies Hatch, Unit 314 Stables Market, Camden, NW1 8AH. Opening hours are Monday to Sunday from 11am to 10pm. Follow them on Twitter and Instagram @Butchies_London