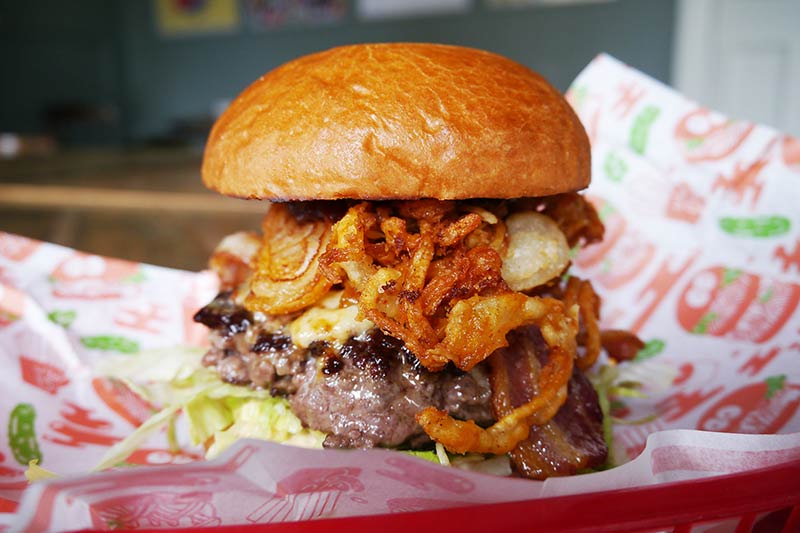 If you've been missing the very-fine-indeed burgers of Burgerac's Burgershack, then this news will be very welcoming - they're back! And they've returned to their old haunt, the Royal Oak in Marylebone.

From next week, right up until Christmas, all the favourites will be back on the menu. So that includes the legendary Hubba Hubba (two mustard fried 3oz aged beef patties, American cheese, pickles, chipotle burger sauce and iceberg lettuce in a soft white glazed bun) and their Chickenshack.

And there are new arrivals. If you're stepping away from the meat, there's a veggie cheeseburger. Burgerac says that "right-hand man Dave grilled a portobello mushroom on the flat top and made a cheeseburger (with a slice of American cheese, ketchup, onions and French’s yellow mustard) using the flat round mushroom instead of a beef patty. It’s got no egg, nuts, and isn’t breaded and deep fried - and hits all the right notes of nostalgia you want from a cheeseburger. With minimum fuss."

They'll also have their own take on a fish finger bun. That's much like the Sonic Sandwich (Burgerac's last venture) Fish Finger sarnie  (the best seller on that menu) - but in a lightly toasted glazed bun rather than white sliced toast with chunky breaded cod fish fingers, homemade tartar sauce, shredded iceberg "and a splat of Heinz Tommy K."

Alongside that, expect the return of their Amazeballs and Chilli Poppers with a new beer-paired special every week too - thanks to a partnership with Camden Town Brewery. Expect the Southern Seoul Chicken, Truffle Deluxe, Big Shack, Smokestack and the Big Kahuna to return.

So for your Marylebone burger fix - this is where you'll need to head straight towards.

When: 24 October up to Christmas