[SIGPLUS_EXCEPTION_SOURCE] Image source is expected to be a full URL or a path relative to the image base folder specified in the back-end but /blog/2013/burgerbash/gallery is neither a URL nor a relative path to an existing file or folder.
0
Shares 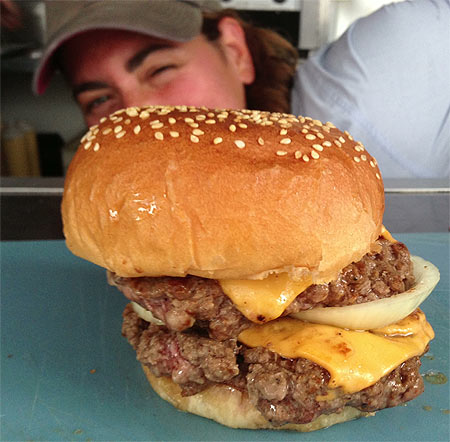 Update - Bleecker St Burger (that's them in the photo) were crowned the winners!

The London burger craze may have just added some American newcomers to the scene, but the city's doing very well on its own before that, thank you. So much so that London restaurants can't just get away with a token burger on the menu any more - it has to be a very good burger indeed to avoid being picked to pieces (and not in a good way) by London's burger elite.

There have been two heats already with Fred Smith (ex Admiral Codrington now Byron) and Joe Grossman from Patty & Bun winning each of those. This latest heat saw The Troll's Pantry (from Brighton), Bleecker Burger, Apero, Drapers Arms, Quality Chop House and Roti Chai take on each other. The burgers ranged from Bleecker's classic double cheeseburger to the Draper's Crispy Pig's Head burger or Quality Chop House's impressive Q burger with plenty of truffled aioli and shavings of truffled cheese as a garnish. Check out the gallery below for the full line up.

With great music and good vibes, this is just the kind of event worth making a trip to Kentish Town for, particularly if you're a burger fan. £50 gets you six half burgers and some drinks - more than enough given some of the behemoths on offer (£25 gets you half of that - but are you ready to miss out on half of the burgers?)

The winner from this third qualifying round were announced after the second session of the heat (update - Bleecker St Burger won) - alas sold out but there's one more, as yet unannounced, round before the final takes place. Follow @youngandfoodish and visit his site to make sure you know as soon as tickets go on sale.