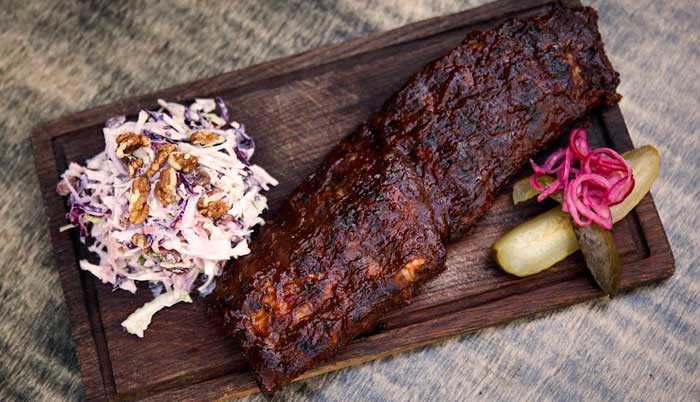 It's been five years in the making, but in a few week's time, BBQ spot Bukowski Grill will open their biggest restaurant to date - this one in the heart of Soho. Their 70 seat D'arblay Street spot will be their third restaurant (following Boxpark in Shoreditch and a second one in Brixton Market).

Turns out to be a bit of a homecoming for chef/owner Robin Freeman who used to work down the road at Blacks. His third, all-day restaurant will kick off with weekday breakfasts for the work crowd, serving up burgers and ribs for lunch. Heading into the evening there'll be a huge list of beer from London breweries, as well as wine and cocktails

New to the menu in Soho you'll find:

There'll also be a new weekend brunch menu featuring, alongside the classics, cornmeal-crusted soft shell crab, poached eggs and hot sauce Hollandaise along with a breakfast Margarita and some special Bloody Mary’s.

Bukowski Grill will open on 22 February 2016 at 10 D’arblay Street, London W1F 8DS. They'll be on soft launch for the first three days with 50% off food only from breakfast through to dinner, opening officially on Thursday 25 February. Email soho@bukowski-grill.co.uk or go to www.bukowski-grill.co.uk to book and keep up with their news on Twitter @BukowskiGrill