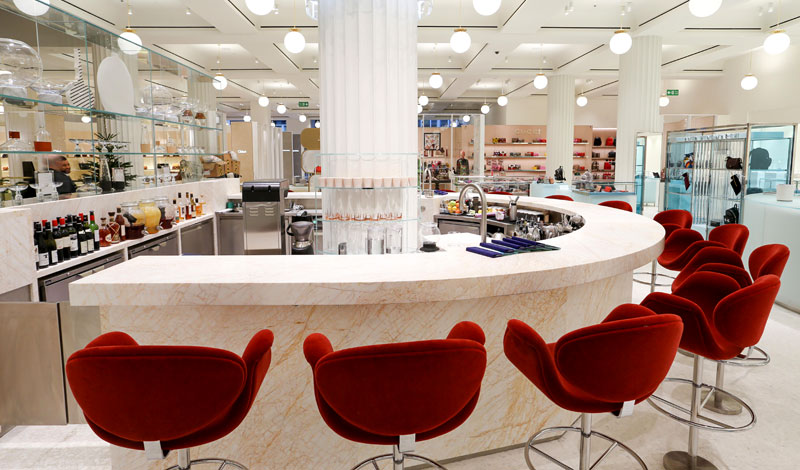 If you’re an intrepid cocktail explorer keen to hunt down the next big thing or the freshest flavour combos, you’re in luck - The Fount has just opened in Selfridges, and the menu is wild.

It’s headed up by world’s top mixologists, Ryan Chetiyawardana, who also won International Bartender of the Year in 2015, and he’ll be using his own personal spirits to whip up many of the unique drinks on offer.

The menu is divided up into lots of sections, including tea and coffee cocktails for £7, for those who need a pick me up with a kick, like the Cusk, an imaginative blend of coffee, Aquavit, ginger coin and demerara sugar, or a lemongrass tea cocktail with Spanish bitters and Martini called the Duke St Cobbler.

A little further down the menu, in the proper cocktail section, it gets even more interesting. The British 45 comes with Mr Lyan’s Diamond Rickey, a blend of gin, almond and fruit invented by Chetiyawardana, which will come mixed with celery, raspberry and Gusbourne English Sparkling wine. Meanwhile, the Crystal Lyan with has peach, lime and vanilla flavours, but is made with sparkling Grey Goose - the first we’ve heard of fizzy vodka (but probably not the last). There's even an Old Fashioned where the serving options are light (charcoal), medium (clay) or rich (wax).

Aside from the main cocktails, you can also get a selection of water hi-balls with different types of water as their base, like the Smoked Coconut Johnnie Walker Black Label with coconut water, chocolate bitters and mint. There’ll also be carefully selected wine list.

There’s a distinct focus on non-alcoholic concoctions as well. There’ll be water infusions, tisanes and botanical brews for £4.50 which include things like The Morning Ritual made with cold-brewed English breakfast tea with biscuit ‘air’, or the Aperitivo Tea with bitter rhubarb, citrus peel and stone fruit. The soft drinks aim to ”show that non-alcoholic cocktails can explore purity and balance without being bland or sickly,” according to Chetiyawardana.

You’ll be able to find the new 14-seater bar, resplendent in white marble, in the heart of Selfridge’s new accessories department. Take the Duke Street entrance - it's where the Top Shop section used to be on the side.