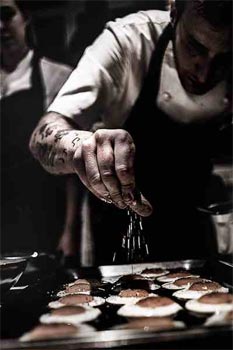 We've had the opening of the John Salt (previously known as Keston Lodge) on Upper Street in our diaries for quite a while now. And it's on our radar not just because it's our neck of the woods, but because they've managed to secure Ben Spalding's services as chef (who we talked to about the new venture a few weeks ago).

Spalding, you'll recall, was previously Head Chef at Roganic and has been cooking up a storm since then at various pop-ups and at his groundbreaking street food venture Stripped Back.

He'll be running a 25 seater restaurant upstairs from the main pub and his menu is certainly going to give drinkers pause for thought, particularly if they were looking for the usual pub fare.

One of Spalding's signature dishes will be "chicken on a brick" - a London house brick coated in a caramel glaze, pairing chicken liver mousse with crispy chicken skin, circled by a mix of sweetcorn kernels, lingon berries, pearl barley and a white onion puree. And - we kid you not - “customers are encouraged to actually lick the brick”. Diners will be able to choose from either a 4, 8 or 12 course tasting menu.

The whole shebang is being run with general cunningness by 580 Ltd, the independent pub company behind The Owl and Pussycat in Shoreditch, The Fellow in King's Cross and Camden's Lock Tavern. And while they say they simply want to open 'a neighbourhood bar with good beer' the fact they've chosen Soulshakers to come up with the cocktail menu, means you'll probably want to work your way through that part of the drinks list too.