BrewDog and Honest burgers collaborate on The BrewBurger 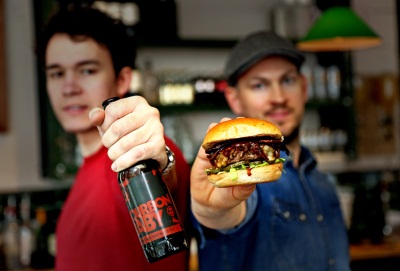 A burger you have to show ID for to order? That's the idea behind the BrewBurger - a collaboration between craft beer company BrewDog and Honest Burgers. The burger contains so much craft beer that you'll have to be over 18 to order it.

The limited edition burger consist of a 150g aged beef patty with Comté cheese and bacon candied with BrewDog’s iconic amber ale, 5AM Saint. The BrewBurger is topped with beef dripping and beer-fried onions using BrewDog’s flagship Punk IPA and a BBQ reduction made from BrewDog’s Paradox cask-aged Imperial Stout. If all that isn't enough beer for you, BrewDog have developed an accompanying bottled beer named Bourbon Baby to go with the burger.

As Honest Burgers' Tom Barton (pictured here with BrewDogs' James Watts) says; "a delicious burger with a genuine ABV is not something you tend to come across every day."

The BrewBurger and Bourbon Baby craft beer package costs £15 and will be available at all Honest Burgers restaurants from 3rd March until 2nd April 2014 and at BrewDog venues across the country on selected dates.