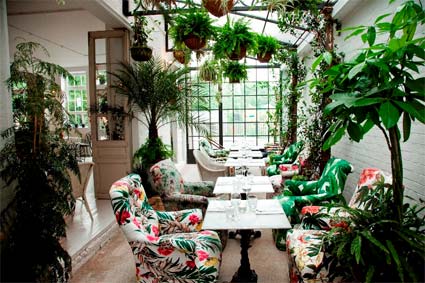 What you need to know Bourne & Hollingsworth Buildings

It will have the "faded grandeur of a stately home". So there's a 70 seat restaurant and greenhouse (that'll be good for Almost Alfresco), a café area, private rooms and a large cocktail bar. It's being designed by people behind Riding House Café, Pizza East, Soho House Berlin among others. If you went to B&H's Kitchen Party pop-up last summer it'll seem very familiar.

The food will be a modern British take on traditional brasserie food. In the kitchen is Head Chef Alex Visciano. He's worked at the two Michelin starred Michel Rostang in France and was previously Sous Chef at the Connaught. We've got a preview of the menu, which includes:

It's split into five distinct areas. The Bottle Room is a private dining room for 14 people,lined with with cabinets full of bottles of boutique spirits and fine alcohol. The cocktail bar will open onto the street while the café area will feature winged mahogany wicker chairs and high backed sofas, referencing that "abandoned country house" look. Meanwhile, the restaurant and greenhouse will mix soft furnishings and armchairs with cane garden furniture and wrought iron benches and will be filled with hanging baskets.

We've also had a preview of the cocktail menu, which includes:

Where is it? 42 Northampton Road, London EC1R 0HU

And when does it open? 10 September (restaurant soft launch), full launch 22 September.

There's a soft launch of the Bourne and Hollingsworth Buildings restaurant from 10-20 September, with 50% off food. To book, call 020 3174 1156 or email bookings@bandhbuildings.com.