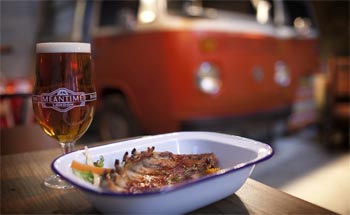 After a three-year closure, owing to the construction of a new railway track running through London Bridge station, Borough’s iconic Wheatsheaf pub has opened its doors once more.

The original, open since 1772, was a firm favourite with locals and market traders, and its loss was sorely felt when it shut up shop in late 2009. Photographer and Wheatsheaf regular, John Ross, even produced a commemorative book, Wheatsheaf RIP, filled with black and white portraits of all the regulars.

Fast-forward three years, however, and The Wheatsheaf is back, albeit without its top floor (that railway track again) and perhaps not quite as the regulars would remember it.

Owners Young & Co. have given the pub an extensive, but considerate, refurbishment. The resulting interior is a mix of old and new and happily there’ss still the original central bar and wooden floors. One welcome addition is the heated outdoor terrace (blankets are also provided if you’re really feeling the cold), complete with a live departure board from London Bridge – very handy when deliberating having ‘just one more’ before catching that last train home.

Being on the doorstep of Borough Market, there’d be no excuse for scrimping on the food, and the menu is right on trend with ‘street food-inspired’ offerings, such as baked Hay Box Ham, Sticky Whiskey Ribs and Cyder Spit Chicken, which is marinated in Aspall’s Cyder overnight and then rotisserie roasted. Bar snacks are also provided, including sausage rolls, husks of corn and, more unusually, Wheatsheaf’s own homemade crisps. When the weather improves, food will be served from a converted VW campervan out on the terrace, which should be a real delight in those brief London summer months.

The Wheatsheaf can be found at 6 Stoney Street and is open Monday to Saturday from 6am to 11.30pm and Sunday 8am -11pm. Food served every day between 11:30am and 10pm.