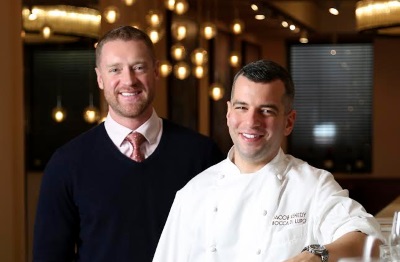 Russell Norman looks set to get a new neighbour next Spring with the news that Jacob Kenedy and Victor Hugo of Bocca di Lupo are going to be opening up a new restaurant beside his Ape & Bird gastropub. The duo have taken on the site that used to be occupied by Pizza Hut and are turning it into a two floor, 4000 square foot restaurant.

The food will be "boisterous, accessible, affordable and utterly delicious" promises Kennedy with the aim to make brilliant food inexpensive.

We don't know much more than that. The landlords for the Shaftesbury Estate have shed a little more light on the project saying "The concept from the founders of Bocca di Lupo stood out because of its originality and the way it complements the surrounding Seven Dials context... [it] and will bring something new to the area."

"I cannot wait to open," says Kennedy, "as I am confident the public will have as much fondness and love for our new concept as I do.”

The unnamed restaurant will open at 140a Shaftesbury Avenue, London WC2H 8PA in Spring 2015.