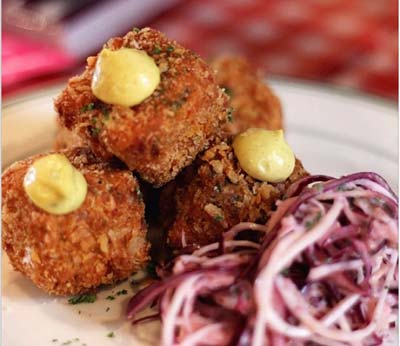 Their van has already been a huge success, but now that the days are a wee bit colder, Bob's Lobster have come indoors for the winter, setting up a residency at the Rising Sun pub in St Paul's (which was previously home to Carl Clarke's Disco Bistro).

They're taking advantage of the extra space inside to expand the lobster menu to encompass all manner of meaty and fishy delights. The menu is going to change regularly, but recent highlights have included (prepare to drool):

As you look at that, you may wonder "but where's the lobster?" Worry not as their signature dishes, the lobster roll and lobster mac n cheese are also available "off-menu". They'll be inviting special guests at the weekends too, so keep an eye on their Twitter feed for more details.

You can find Bob's & Co above The Rising Sun at  61 Carter Lane, London EC4V 5DY every Tuesday - Friday for lunch 12 -3pm and dinner 5-10pm. For more information, follow them on Twitter.