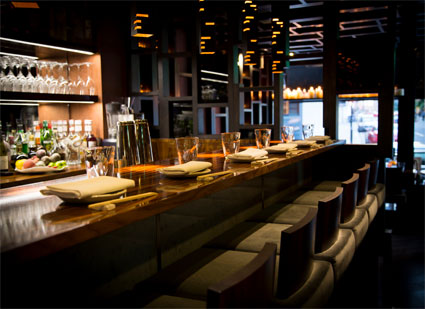 If there's one recurring theme in London restaurant openings this Autumn, it's that lots of their cuisine looks to the East for influence. And the latest to be announced is a Chinese dim sum restaurant and tea house Bō Làng on Draycott Avenue.

Certainly the team involved look to have the right credentials - Head Chef and Dim Sum Master Kai Wang has over 10 years experience as a dim sum chef with his previous London places of employment including Novikov and Grand Imperial at Grosvenor House.

The menu will feature a mix of traditional and modern dim sum such as snow crab, coriander and water chestnut with balsamic pearls; sea bass, prawn and Chinese celery; and lobster with goji berry. Other dishes will be blue swimmer crab salad, sautéed root vegetables with jasmine and Bō Làng crispy duck.

The 60 cover restaurant will also offer afternoon tea, a short cocktail list and a list of wines from boutique wine producers. Design comes courtesy of Shaun Clarkson who was also responsible for Pitt Cue Co and Dukes Hotel.

Reservations will be taken for mid-September onwards from the 1 August at www.bolangrestaurant.co.uk or via telephone from 1 September 2013. The restaurant will be open Monday – Saturday from 12pm to 11.45pm and on Sundays from 12pm to 3.30pm