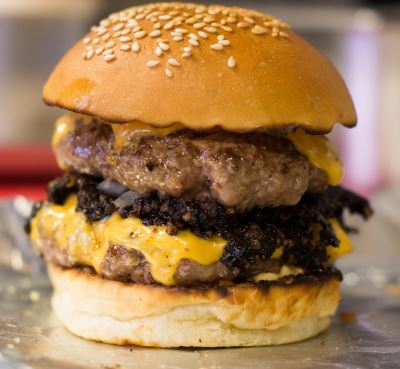 We are BIG fans of Bleecker St. Burger and have been ever since we first tried their amazing patties at the London Burger Bash. So we're thrilled that the street food traders are opening up a permanent place inside Old Spitalfields Market where the Micha cafe currently is.

As for the permanent spot in particular, "I like to think of it as the wheels of the truck coming off, as it's going to be very similar in terms of size and service." There will be something brand new on the menu here at Spitalfields - Bleecker's own milkshakes. Like their burgers they've started from scratch and have made their own soft serve ice-cream as the base, have sourced premium quality ingredients and each one will be made to order. On the menu will be Vanilla, Black & White and Coffee (Caravan coffee) flavoured shakes.

Other news on the drinks front is that (subject to licence) they'll have Brooklyn Lager and Lagunitas IPA on tap alongside a rotating selection of American canned craft beers. And, another first, they'll be carrying Hackney's Square Root soda on tap.

Bleecker St Burger opens on Thursday 26th February at Unit B in the Pavilion Building at Old Spitalfields Market. Opening hours will be 11.30am to 9pm. On opening day they'll be giving away 400 limited edition t-shirts to the first customers. Keep up with their news on Twitter @bleeckerburger