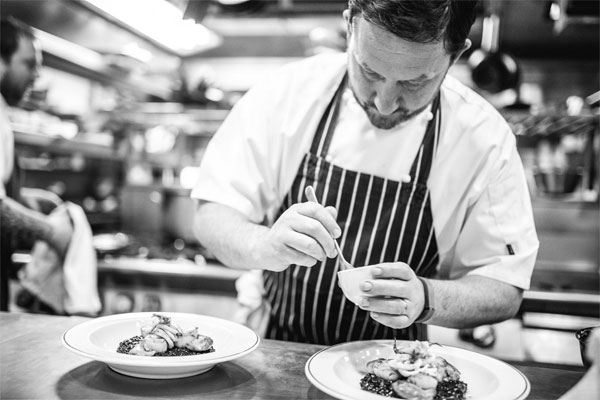 Housed in what's best known as Michelin House, the upstairs Bibendum restaurant (named after the Michelin Man himself) has just got a new chef and also has a revamp underway, courtesy of none other than one of its founders, Sir Terence Conran.

The new Head Chef is Peter Robinson, previously from Hotel Tresanton in St Mawes. He was spotted by Conran himself who says “I celebrated my 70th birthday at the Hotel Tresanton, and after the meal, I asked to see the Head Chef. It was Peter. I gave him my business card and said: ‘Call me when you open your own place’. Thirteen years later, here we are. Peter is an exceptional chef, and his cooking embodies all that Bibendum stands for."

Robinson has worked on the new menu with Simon Hopkinson, who originally launched Bibendum, They've put together a new menu that keeps some of the Bibendum classics, like fish soup with rouille and steak tartare, while adding new dishes that will change daily. Some examples of those are:

They also have a huge list of 800 bins that's just been revamped by wine columnist Matthew Jukes.

As for the redesign - that's best summed up by their release: "New design details will include a plush slate carpet with wooden-framed and coloured, Scottish leather chairs mirroring the colour scheme of the windows. The only tan leather chair will be reserved for Sir Terence, at his favourite corner table in the restaurant and will be created from the finest Aniline leather. Curved and mirrored waiter stations, previously used in 1987, will be restored to their former glory, while an exhibition of Michelin advertising posters featuring the portly mascot, Monsieur Bibendum, will be displayed to mark the re-launch." We hope no-one sits on Sir Terence's chair by mistake.

If all this sounds exciting, you'll want to pencil in 14 May to your diary when they'll be hosting a one-off, celebratory dinner cooked by Robinson with your hosts for the evening none other than Stephen Fry and Founding Chef Simon Hopkinson. Tickets will be £150 inclusive of wine and can be booked by calling 020 7581 5817.