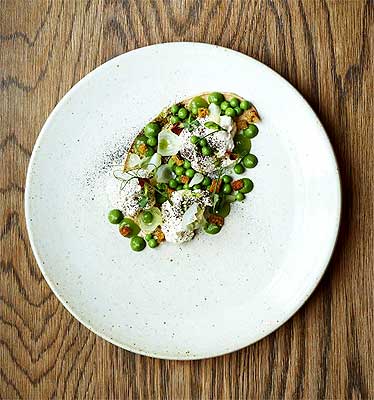 Months after Lee Westcott took over the two restaurants at the Town Hall Hotel from Nuno Mendes comes news that he's appointed a Head Chef to take over the Corner Room. This is the more casual restaurant at the hotel, tucked upstairs in - you've guessed it - a corner of the hotel.

John Christie will be in charge of the restaurant and his CV is impressive - Christie comes here via Kinaird House Hotel in Perthshire, Andrew Fairlie at Gleneagles and then Hibiscus with time for a stage at El Celler de Can Roca in Girona.

Christie's seasonal menu kicks off with dishes such as roe deer with baby gem kimchi, pear beurre noisette and dandelion, and John Dory with kohlrabi, Cornish crab and lardo, with greengage, green tea and cobnut for dessert.

For the first time the restaurant will now offer a 6-course tasting menu featuring downsized a la carte dishes.