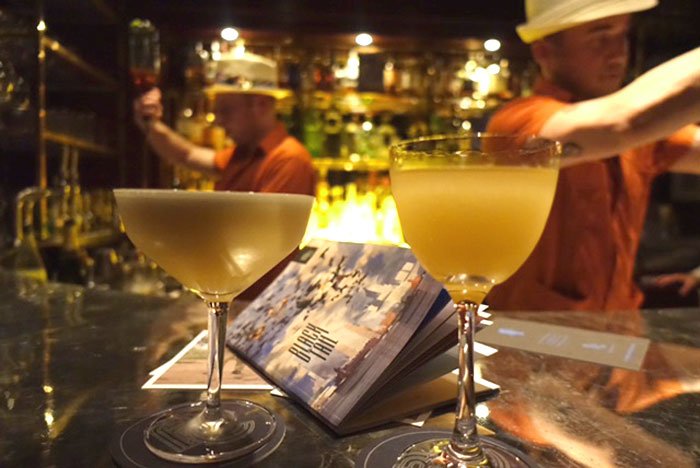 Updated with impressions of the pop-up

Since originally writing this piece, we've had a chance to try out the Blacktail pop-up firsthand at the launch. We were wondering if it could really match our high expectations, based on our immediate love of the New York original. And we're very pleased to report that those expectations were easily matched.

They have five cocktails from the New York bar and five that they've created specifically for the London pop-up. AND they have the amazing frozen daquiris that we honestly could have kept drinking the entire night. The rest of the cocktails are just as fine (we have a particular love for the sour Adeline and can highly recommend that). And the rabbit Cuban sandwich is still an amazing sarnie.

It's only on for three days and we can't recommend strongly enough that you make a trip down there this weekend. We're already planning a return trip ourselves.

Cocktail lovers, listen up. The people behind The Dead Rabbit - dubbed the world’s best bar - are bringing a taste of New York to Soho this February in the form of BlackTail.

The cocktail bar, which we’re a big fan of, is usually to be found in NYC’s financial district. But for a few days, they’ll be bringing their alcohol expertise to London as part of the of the Bloomsbury Club Bar’s ongoing Club Residencies Project. On offer, there’ll be plenty of tipples which are inspired by the good old days of US Prohibition, and the resulting spate of American bars that appeared down south in Havana.

The menu, designed by the BlackTail’s bar manager Jesse Vida, comes split into five sections: Highball, Punch, Sour, Old Fashioned and Cocktails, and will be based on drinks from times gone by but with that all important modern twist and flavours that are ‘amplified with the latest techniques’.

We’re also mighty glad to hear that BlackTail will be bringing their Cuban-influenced food, particularly their rabbit sandwich which comes loaded up with confit rabbit leg, rosemary ham, roast pork shoulder, swiss tomme and dill (that's the one we had in NYC above). There’ll be others dishes too, which are designed to complement the cocktails. You’ll be able to enjoy it while soaking up some traditional Cuban atmosphere thanks to some live jazz from the region.

BlackTail is a relative newcomer on the drinks scene, launched in August 2016 by Sean Muldoon and Jack McGarry of The Dead Rabbit. It follows other residencies at the Bloomsbury Club Bar, like The Clumsies, which they hosted back in November.