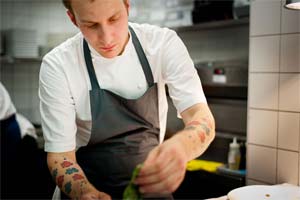 Ben Spalding has had his fair share of press lately. Firstly with a largely positive response to his time at John Salt and then for his rather untimely departure. We know he's on the hunt for a permanent location but, much like his Stripped Back venture, Spalding's not one to stay away from cooking while he's looking for a place.

He's just announced a series of dinners that sees him creating a dinner that's inspired by a different country every week, exploring "different regions, heritage and amazing ingredients in each chosen country". The dinners will be held in a central London location (revealed after you book) and will be a communal dining experience. First up is France (with a few tickets available here for February 26 at the time of writing).

The countries for future dinners will be revealed by Spalding on Twitter - so if you missed him at John Salt, follow him there to grab a place as they are revealed.