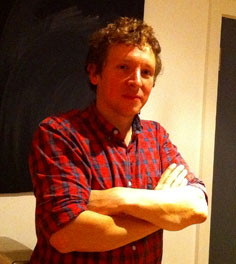 The last time chef Ben Greeno turned up at a supper club, there was something of a mini riot amongst London’s fooderati to nab places at the table, and then a slew of disappointed people who hadn’t managed it. Why so popular? A glance at Mr Greeno’s cv might explain it – with training at Sat Baines followed by two stints at World’s Best Restaurant ™ Noma and Manhattan’s Momofuku, who wouldn’t want to try his food?

When Hot Dinners heard that Ben had decided to open his own London supperclub, this time we were immediately online, emailing him for details, thereby managing to snag two seats at his third evening. The Tudor Road supperclub is based in an East London loft apartment (Ben was persuaded to start the supperclub by Loft Project/Viajante’s Nuno Mendes) which is where we spent an evening enjoying some of the most innovative food we’ve had for a while at the absolute knock-down, bargain basement price of just £35. 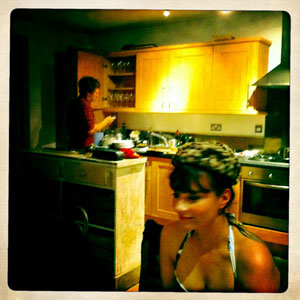 Inspired by his time at Noma, where the chefs are all encouraged to forage what they can from nearby parks and countryside, Ben had done his best in London, finding wood sorrel, nasturtium flowers and even borage in Hackney’s garden squares and parks. As we mingled with other guests (who included a food writer, TV chef, electrician and the carpenter responsible for the table we were eating off) we were handed a glass of Prosecco, crudités and a dip.

The meal proper began with fillets of raw mackerel served up with thin discs of English plums dotted with tiny squares of Japanese plums – a Spartan dish where the ingredients sang out.  Our next dish was described to us as burned leeks with brown butter and garlic capers which in no way explains why those chargrilled leeks tasted so astonishingly, well...interesting.

Next was a slow cooked egg served up with Jerusalem artichoke and smoked pig cheek, followed by a plate of pink lamb neck with elderberries and elderflowers.  The dessert was a beautiful dish of raspberries, apple and yoghurt dotted with teeny rosewater meringues . Oh and there were caramel truffles for afters, served with a Square Mile infusion of coffee bean fruits which we were warned to sip sparingly, unless we wanted to be wired to the eyeballs till dawn. 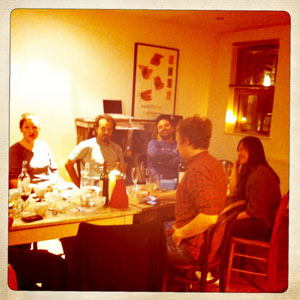 As we chatted over dinner, Ben explained that having decided woodwork wasn’t his thing at school, he became inspired by Gordon Ramsay’s book, Passion for Cooking. He credits Sat Bains as his mentor though, having worked for him for nine years – and still speaks to Bains almost every day.

As for the World’s Best Restaurant ™ , having been part of the brigade who opened Noma, he recalled just how hard the first season was there. With no preparation work done such as salting products or making chutneys the total adherence to local and seasonal meant a lot of beetroot and potatoes on the menu that first winter. The good news is that Ben has stayed in contact with his former colleagues there and some of the chefs from Noma should certainly be turning up for a night or two at Tudor Road before it ends.

The real question was what’s next for Ben. Is Tudor Road, as the Loft Project was for Nuno, a means to an end? Turns out we haven’t got long to enjoy Ben’s skills before he’s whisked away to an A-list job he told us about and then swore us to secrecy. Remember, you didn’t read it here first.

Book a table at the Tudor Road supperclub here.