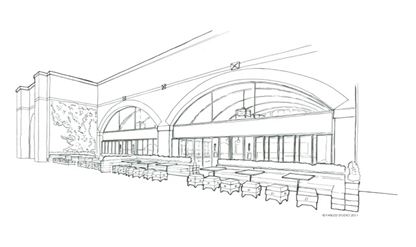 Hoxton looks set to get another interesting new restaurant in March when Beagle opens its doors on Geffrye Street. The restaurant, bar and coffee shop will take over three renovated railway arches right next door to Hoxton Station. It'll have room for 55 covers and the bar a further 45.

What's particularly interesting about this opening is that the chef will be James Ferguson (former Head Chef at the much-loved Rochelle Canteen). The food will be seasonal, produce led British cooking - what else? - and menus will change daily. Expect plenty of grilled dishes as the kitchen will feature a traditional wood grill. Dishes unveiled so far include pig’s head croquette with gribiche, whole wild sea bass with samphire and cucumber and custard tart with poached rhubarb.

As for drinks, there'll be cocktails (including some made with nettle and ginger house made cordials, rhubarb infusions and seasonal foraged ingredients), British beers and wines and - for warmer times - there'll also be a large outside seating area for 60 people.

The chaps behind the launch are brothers Danny and Kieran Clancy. Danny recently scored a hit with the opening of Bonnie Gull in Fitzrovia.