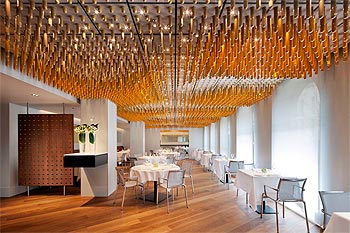 There's been a lot of speculation on what would replace Nahm restaurant at the Halkin hotel. This morning we had confirmation that the team behind top Spanish restaurant Arzak, would be opening a new Basque restaurant there next year.

“Ametsa means ‘dream’ in our language,” says Elena: “The dream of a kitchen beyond our frontiers, in the middle of London, in the heart of the Halkin Hotel.” “It is a very exciting development for us,” adds Juan Mari.

So what kind of food will you get there. It'll apparently be 'rooted in the traditions of ‘New Basque Cuisine’ which in practice means combining flavours you'd expect from that region with modern, surprising twists. Restaurant magazine described Arzak's success down to their decision to 'take good, honest Spanish food and raise it to new heights of flavour and texture, and transform eating it into a multisensory experience.

The arrival of Ametsa will mean a fresh look for the Halkin's restaurant. London-based partnership, AB Rogers, will be in charge of design. They're the consultancy picked by Little Chef for the design overhaul of Little Chef Popham by Heston Blumenthal.