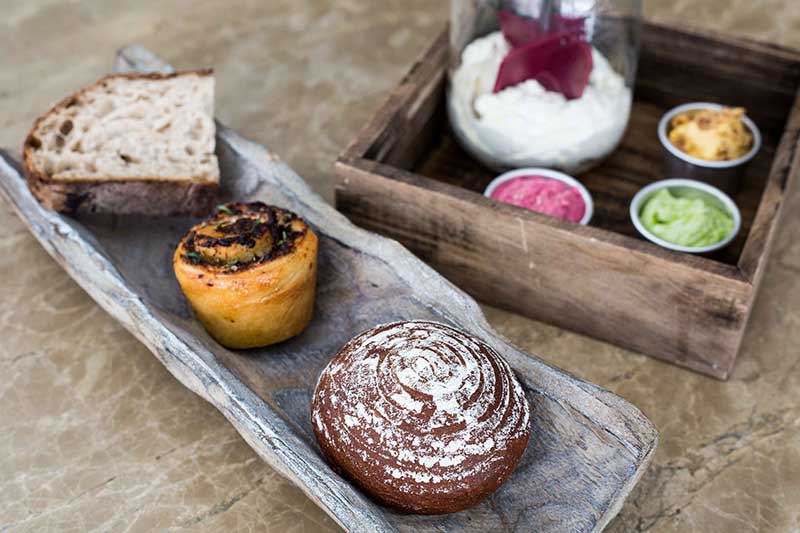 In a nutshell: Fuss-free sharing plates and baked goods

Summing it all up: Inside Shoreditch's giant M by Montcalm hotel (the one with the optical illusion windows - you know what we mean), there's a new restaurant by the name of PLATE from very well-connected chef Arnaud Stevens. Inside, they'll forgo tablecloths and sommeliers in the name of casual dining, and include a downstairs bakery that'll serve a bread flight with matching butters.

With its small plates, stripped back decor (not to mention name), communal dining set up and even its own subterranean artisanal bakery, PLATE certainly ticks a lot of the boxes in Shoreditch bingo.

It's the latest offering from chef Arnaud Stevens, whose background sounds less like a CV than a who's who of famous British chefs he's worked with (Jason Atherton, Gordon Ramsay, Pierre Koffman...) Arnaud is the chef behind well-rated SixtyOne over by Marble Arch.

PLATE will be operating out of M by Montcalm which towers over Old Street roundabout with its Magic Eye-esque design. Unlike the hotel's flash interior though, the idea behind PLATE is to be free of "daunting sommeliers and tablecloths", leaving you able to enjoy the flavours without distraction.

Speaking of flavours, Arnaud plans draw heavily on his training in classical French cuisine to populate the "fuss-free" menu. It'll include a range of different sized dishes, from snacks to sharing plates and full portions.

Some of the dishes you can expect are:

Looking after things in the kitchen will be executive chef Matt Hill, who's worked at SixtyOne, and for folk like Tom Aikens and Peter Reffell at Bleeding Heart.

As for the artisanal bakery, that'll be found downstairs, providing hotel residents, locals and passersby with the likes of marmite bread, afternoon tea and coffees. PLATE BAKE, as it's called, will also be answering our carby prayers by offering a bread flight (finally!), which will include three seasonal bakes paired with flavoured butters. So, for instance, you'll be able to start with a simple sourdough and whipped butter, followed by a mushroom bread with beetroot butter, and so on. And if you're feeling extra Shoreditch-y, you'll even be able to churn the butter at your table yourself. It's as if they came up with that one especially for Boomerang...