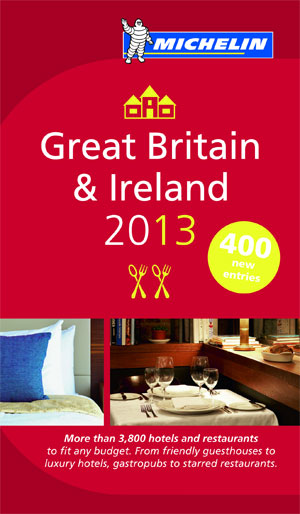 Following a few years of disastrous Michelin star leaks, it looked as though the guide had finally got things under control again over the past two announcements. But this morning, Twitter was flooded with people wondering why the map on the ViaMichelin website was showing results of UK restaurants with Michelin stars that didn't have them last time they'd looked. Seems that London restaurant PR company Sauce got the nod from a client who told them they had a Bib and when searching on the site, spotted a whole heap of other restaurants with new star (and Bib) status.

After much speculation as to whether the results were the real deal or not, during which Michelin briefly took the new stars down from its site, the guide company finally gave up trying to pretend it hadn't happened and confirmed things later in the day.

The key 'results' for London are that Sketch goes up to 2 stars and the following restaurants all get their first Michelin star:

Tom Aikens has regained his Michelin star, but Gauthier Soho and Zafferano both lost theirs.

As for new Bib Gourmands - awarded for good value places to eat. New London Bibs are:

Alyn Williams pulled off a particularly speedy first Michelin star, earning it in well under a year. He said "It’s such a lovely feeling after all the hard work we have put in. It’s a great honour for the team and myself and I’m very proud to have achieved this accolade. We will continue to do what we are doing and will continually strive to improve."

Meanwhile. Hedone's Mikael Jonsson said "I am overwhelmed, utterly unable to digest it at this stage. I am very proud of achieving this, and when I think that just over a year ago I was embarking on my first ever restaurant venture, I am actually staggered at what we have achieved."

Tim Allen, who earned Launceston Place a star after taking over from Tristan Welch, said "A Michelin star is an incredible accomplishment. I am so proud of my team who work to exceptional standards at every service, and feel this really is a testament to all of our hard work this year."

"It's fantastic news," Tom Aikens told us. "Great for the team and the restaurant."

Outside London the key results are that Simon Rogan's L'enclume moves up to 2 stars as does Michael Wignall at The Latymer (Pennyhill Park Hotel) while Heston's pub The Hind's Head gets its first star as does Alimentum in Cambridge and Thackeray's in Tunbridge Wells, Paul Ainsworth at No 6 in Padstow, Bath Priory, Restaurant Tristan in Horsham, Raby Hunt in Darlington and the Red Lion Freehouse in East Chisenbury.

On a more personal note, as Hot Dinners' folks originally hail from Galway in Ireland, we're also very pleased to see that Aniar in Galway has won the city its first Michelin star.

For more info on the new winners - check out our full lowdown of London's Michelin starred restaurants for 2013.