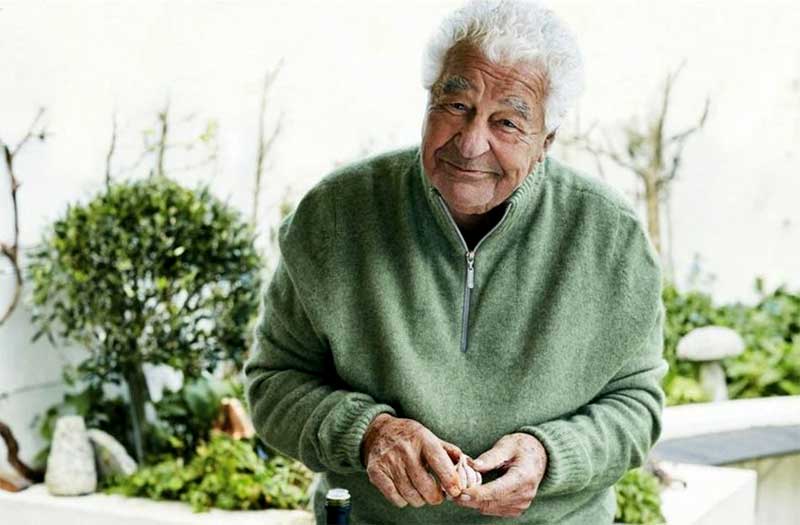 This morning, London restaurant legend Antonio Carluccio passed away. Here's what we think you should know about him.

For many folk the name Carluccio will be synonymous with the chain of Italian restaurants that bears his name, but Antonio Carluccio was much more of a force in the London restaurant scene before that.

He really came to the forefront in the eighties when he first became the manager of Terence Conran's Neal Street Restaurant in Covent Garden, way back in 1981. Much in the same way that the River Cafe was the works canteen for Ruth Roger's architect husband Sir Richard Rogers, the Neal Street Cafe performed the same function for the Conran design studio.

Eight years later, Conran sold it to Carluccio who was that point married to Conran's sister Priscilla. Under Carluccio, the restaurant became famous for being a rare spot in London where you could eat unfussy Italian really well. The amount of money Hot Dinners personally blew in the deli there on focaccia and amazing pasta is something we have no regrets over.

Carluccio was a mentor for both Gennaro Contaldo and Jamie Oliver. The Neal Street restuarant was the first place Oliver worked and was where Contaldo spent 14 years as Carluccio's assistant.

In 1999 he founded the chain which bore his name. He published 17 books, most recently his  2002 book on vegetables was reissued just last year. Over the years he picked up many gongs but was perhaps most proud of being appointed Commendatore by the Italian Government in 1998 and the OBE he was given by The Queen in 2007 for services to the catering industry.

In recent years, he made a real difference to many with his decision to speak openly about the depression he'd long suffered with. He also spent a lot of time working for the Clink charity, training prisoners to give them a new start in life. But in the end, we'd like to think his legacy can be summed up in his quote that ""My aim has always been to create beautiful, authentic food."

As you might imagine, tributes to the larger-than-life chef, author and restaurateur are rolling in - we'll update this as we see them. But let's start with author James Steen who posted this from an interview with Carluccio on his final meal. Here's hoping it wasn't too far from this.

"I'd like it to be set in the middle of the Italian countryside, beneath a pergola. I will begin the meal with spaghettini with cherry tomatoes and basil. Very simple. For the main course, I'd like a ragout of offal - lung and all the other bits and pieces - served with rice. And then for dessert, I'd step away from the pergola and pick a white peach. One peach picked directly from the tree. Then I would bit into it and - whoosh! - the taste would take me straight back to my childhood."

Hi guys with great sadness I’ve heard that Antonio Carluccio passed away this morning. He was my first London Boss at the Neal Street restaurant 25 years ago which was an institution and Mecca of wild mushrooms where I had the pleasure of working for him. He was such a charismatic charming don of all things Italian!! Always hanging out the front door of the restaurant with a big fat Cigar a glass of something splendid and his amazing fuzzy white hair . The imagine here is from his great cook book that first got me hooked on Pasta which I found so very inspirational and drove me to work fo him. I also had the pleasure of making and producing his TV show the “Two Greedy Italians “ with his life long best friend and partner in crime @gennarocontaldo who were hilarious together !! he was an amazing food ambassador that will be sorely missed. My love goes out to his partner Sabina his family and his dear and close friends on this very sad day. Viva Antonio Carluccio @cookcarluccio Cook a feast up there mate 🙏xxxxxxxxxxxxxxxxxxxxxxxx

Heard the sad news of a colleague s departure-a good friend, possibly the most loved italien man in the country by his team -the nation❤️🇮🇪

RIP. You taught me so much and what fun we had. I hope there are woodland glades of filled with mushrooms for you to walk through. https://t.co/p29xXahrPF

RIP Antonio Carluccio. So glad I was able to chat with you again so recently, I will miss you. Very shocking news, you seemed eternal!

So saddened to hear our Culinary Leader, Friend and ex Boss has passed away today. Rest in peace Antonio.#antoniocarluccio

Hearing the sad news about Antonio Carluccio. A true Italian cooking powerhouse - fun, funny, friendly, outspoken and prolific. Never saw him without a smile on his face (and one of his books in his hand). He was a true character of our food scene and will be missed https://t.co/zkCGa459QG

Such a shame, I had the privilege of working with Antonio on Saturday Kitchen my first time, he was really kind and supportive and offered me lots of advice to help my nerves, such a gent.
The culinary world has lost a legend. The godfather of Italian cuisine.
🙌🙌 https://t.co/gN9gNPUmLs

Terribly sad to hear of the passing of Antonio, who was in magnificent form at the ICA not two weeks ago, larger than life itself. Raising a porcini in loving memory.

Hot Dinners' condolences go out to his family and many, many friends.