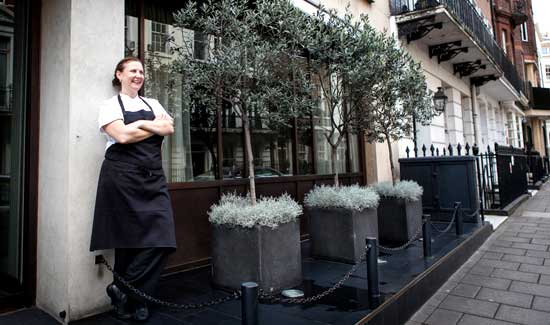 Angela Hartnett's first main venture outside of Murano, the offshoot Cafe Murano, was showered with praise when it first opened. And it's clearly been very successful for her as another one is on the way, this time to Tavistock Street in Covent Garden.

Running the kitchen will be Head Chef, Richard Lloyd, who was formerly sous chef at Hartnett, Holder and Co. They're working on a menu that's been inspired by recent trips to Italy. That menu will focus on northern Italy's coastal regions and there will be an all-Italian wine list alongside. So far, confirmed dishes are:

Given that it's right in the theatre district, there will be a pre and post theatre menu at £16.50 for two courses or £21 for three. And in addition to the main cafe, there's the Pastificio next door which will sell pasta to take home, including spinach and ricotta tortelli and meaty anolini. Plus they'll have salumi, fresh pasta sauces and wines in the shop too.

On the drinks front there will be cocktails that interpret classics and specialise in Italian spirits - including the Lusinghiero, a dry drink made with a rum and vermouth base. Plus, on the sparkling front, as well as Prosecco they'll also have Lambrusco and Franciacorta.

The restaurant itself will seat 140 across two floors and is designed by Russell Sage Studios (Grain Store, Social Eating House). Expect terracotta leather upholstered banquette seating on the ground floor along with a Carrara marble bar for counter dining. There will also be a marble counter showcasing fresh, seasonal produce, breads and antipasti. Upstairs sounds tempting too, featuring a glass roof which will be ideal for the summer months.

Cafe Murano Covent Garden opens 29 June 2015 at 34-36 Tavistock Street,London WC2E 7PB. Telephone 020 7240 3654. They will be opening the reservations line on 22 June to take bookings from 29 June.For more information, follow them on Twitter @CafeMuranoCG