[SIGPLUS_EXCEPTION_SOURCE] Image source is expected to be a full URL or a path relative to the image base folder specified in the back-end but /blog/2012/mugaritz/gallery is neither a URL nor a relative path to an existing file or folder.
0
Shares 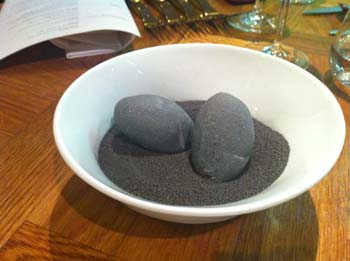 The great and the good of the food world (and Hot Dinners) were in Marylebone last night for the launch of chef Andoni Aduriz's book Mugaritz - the story of his Basque restaurant of the same name. Although he's published several books before this is the first in the English language and is in part a homage to the international nature of his clientele these days.

"I really think it does Mugaritz the experience justice," said Amanda Ridout, MD of his publishers Phaidon. "And I hope it reflects a little bit of the creative genius and rigour and ambition of the restaurant." Mugaritz is currently (at least until Monday) No 3 in the World's 50 Best Restaurants list.

Last night's dinner at Iberica on Great Portland Street was Andoni's first time cooking in London (he's not keen on cooking anywhere other than the kitchens at Mugaritz). Happily he had the services of fellow two-Michelin-starred chef Nacho Manzano - who's Iberica's executive chef - to help him.

After hoovering up the canapes, washed down with a cocktail of thyme, lemon and vodka, guests were treated to an 11-course menu of some of Mugaritz's best dishes. There were of course, Andoni's famous edible stones - Cherie potatoes covered with a dusting of kaolin and salt that looked (and felt) exactly like a warm stone until you bit into them. Other highlights were a vegetable carpaccio which for the world appeared to be raw beef, but turned out to be watermelon,  cod fish 'kokotxa' - gelatinous cod's throat served over a salted cod and potato brandade and an amazing dessert of sugary tablet with honey bubbles.

An astonishing meal, but according to our dining companion Susanah from Mugaritz, we really need to go out and try the restaurant proper in Spain. Oh, well, if you insist....