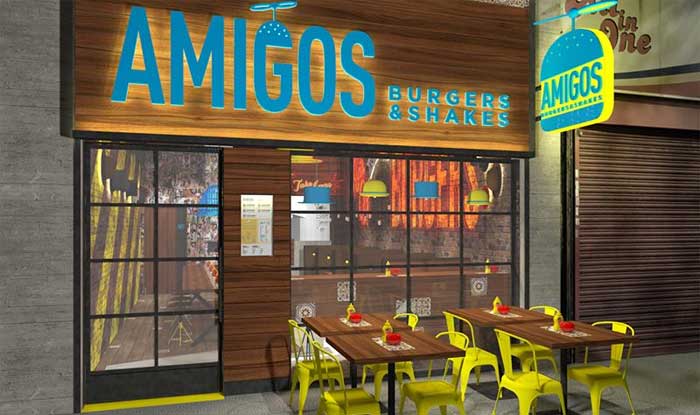 Popular Acton halal burger and chicken joint Amigos Peri Peri are opening their second West London venture in Shepherd’s Bush. The founders claim they’re ‘just two dudes in search of the perfect set of buns’ and they're giving away hundreds of burgers for the opening weekend in pursuit of that.

Located within spitting distance of Westfield, Amigos Burgers & Shakes could be a handy pitstop for hungry shoppers. The 10 burgers on the menu (6oz or 10oz) offer combos with a Tex-Mex flavour, including The Happynero (with American cheese, habanero jam and dill pickles) and The Texan (with sweetcorn relish, nachos and hickory BBQ sauce). For a break from the burger norm, there’s The Greek – a lamb patty with cheese, cumin salsa, tomato and tsatsiki. Gluttons can earn a place on the Wall of Fame if they eat a 50oz burger and fries in 30 minutes. All the meat will be halal and sourced from a local family business.

For dessert, there are crowd-pleasers like sticky toffee pudding, apple pie and profiteroles, as well as a curveball in the form of fries with Nutella, ice cream and hot caramel called It’s All Wrong.

There’s no alcohol, but you can expect some seriously indulgent milkshakes Hershey’s Cookies & Creme or Oreo & Aero Mint.

Amigos Burgers & Shakes opens on 24 May 2015 at 120 Uxbridge Road, London W12 8AA. From 2pm at the Grand Opening, they’ll be giving away 500 free burgers if you repost their event poster, like their page or follow them on social media. The following day (Bank Holiday Monday 25 May) it'll be a BOGOF offer. Opening hours are Monday-Sunday, 12pm-12am. But look out for potential later opening hours during Ramadan, which starts 18 June 2015. Keep up with their news on Twitter @AmigosBurgers