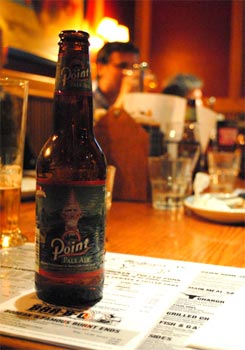 Sunshine, beer and barbecue on a balmy evening – even on a Tuesday, Hot Dinners wouldn’t pass up an opportunity to get stuck into this most summery of combinations. Which was why we were down at Bodean’s, at their Tower Hill Branch this week. There, we sampled a tasting menu pairing a variety of imported beers provided by the American Craft Beer Company with a selection of Bodean’s meaty barbecue dishes.

Forget your PBR and Budweiser – the American Craft Beer Company only provides true craft beer from small breweries, and all are packed with flavour. On the table the night we went were some Point Beers imported from Wisconsin, ranging from a zingy Belgian white beer through to an almost-intimidating black ale. Three of the beers are currently on as specials in Bodean's Soho branch, and will soon make an appearance in Tower Hill.

It’s no secret that meat, chips and beer go together marvellously as a trio, so we ignored the concept of veg for the evening (unless you count a few helpings of some dangerously moreish sweet potato fries) and got stuck in to a night of big American flavours.

The refreshing, easy-to-drink Belgian white opened proceedings gently with some clam chowder. We then dug into a smoked chicken fajita which went down fantastically with Point Amber Classic, a richly-caramel amber lager and currently the favourite in Bodean’s Soho branch. Mark and Ed, co-owners of the American Craft Beer Co, explained how the amber lager is Brooklyn Vienna style, meaning it's rich in caramel malt flavours and makes for a smooth finish.

As Hot Dinners moved greedily on to Bodeans’ pieces de resistances of pulled pork sandwiches and baby back ribs, we were treated to an IPA which boasts 34 IBU – or international bitter units, as we’re informed by Ed and Mark. The sharpness definitely provided a good contrast for the meaty flavours and the fiery blast of the Carolina sauce we were encouraged to try out on the pulled pork. We finished with the two most powerful items on the menu, Point Black Ale, and the richly-marinaded burnt ends, both full of intense flavours and perfect for each other.

While the American Craft Beer Company is a relatively new player, just coming up to its second year, it’s already managed to get its selection of ales and beers into 13 pubs, and the ones we tried made a great match with Bodean’s dishes. So if you find yourself this summer tucking into a plate of Bodean’s sticky, smoked barbecued delights, why not skip the weaker lagers, and try something that packs a bit more punch?