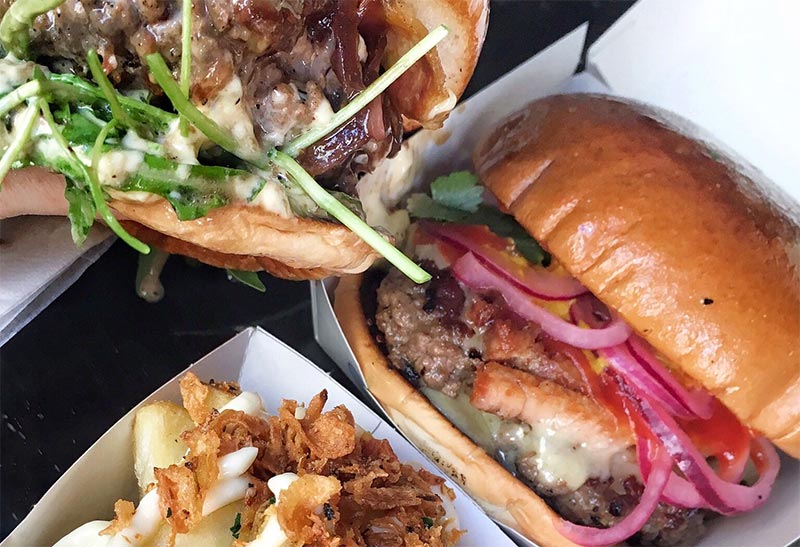 This winter, you’ll be able to tuck into award-winning burgers and a whole host of British pub classics at The George & Dragon pub, where YBF Chef of the Year Adam Rawson will take the reigns for his first long residency. He's been popping up in various places over the last few months but this sees him setting up shop at The George and Dragon for three months.

His two prize-winning burgers, which were originally created in miniature form for the Slider Decider challenge, will now be available in a more generous size. First up there’ll be the 2015 winner, the Peruvian-style Pan Con Chicharron made with aged beef, crispy pork and plenty of spicy condiments.

Or, you can opt for the Rawson’s take on the cheeseburger, the Global Traveller, which comes with smoked cheddar, onion pickle, stout-battered onion rings and that all-important British ingredient, Branston pickle.

Veggies will also be looked after, thanks to the Moroccan-themed Aubergine Zaalouk which comes with a generous splodge of smoked yoghurt, rose and harissa jam served on a patty of crispy aubergine. There’ll also be a new burger each month, which will reflect the culinary heritage of different country each time.

They’ll be served with a side of chips, as all burgers should, which will come with proper onion spice seasoning.

Those after a lighter bite will be able to enjoy a new bar snack menu with plenty of pub classics with a gourmet twist. There’ll be gorgonzola-baked breaded mussels, cider-braised pork cheeks, or the ‘nduja and rosemary scotch egg, plus a host of specials which will rotate throughout the winter residency.

Adam Rawson, who trained under chefs like Gordon Ramsay and Nuno Mendes, cut his teeth in White Rabbit and Lucky Chip, before winning the Young British Foodie award of best chef in 2015. The residency is set to run throughout the winter and there’ll be 20% off until 30 November.

The residency runs at George & Dragon pub, at 151 Cleveland Street, Fitzrovia, W1T 6QN and will be open Monday to Friday 12-10pm. Follow Adam Rawson on Twitter @adam_rawson89 or on Instagram @chef_adamrawson.