Talking to Sara Galvin about the new Galvin Demoiselle at Harrods 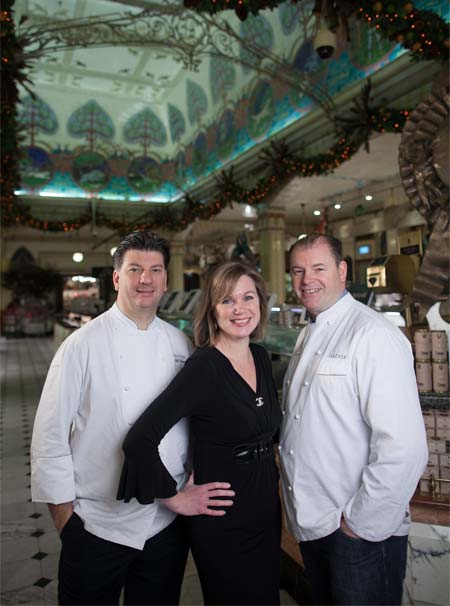 When Harrods played host to the French Laundry it heralded a sea change in the way the store looked at its restaurants. Since then, a whole host of chefs have announced they’ll be opening up at the Knightsbridge corner store including Richard Corrigan as well as restaurateur Eddie Lim (Awana, Mango Tree). Hot Dinners sat down with Sara Galvin, who’s going to be the new Patron at Galvin Demoiselle at Harrods to find out what her plans were for their new restaurant.

What was your first impression when you heard about the Harrods offer?

When I heard we were going to be doing something there I hadn't set foot in Harrods for around 10 years. So I went and I’d forgotten what an incredible space it is. There are some major department stores in London but the other stores just don't have the character in terms of the architecture, the design. And that's what really captured our imagination.

So you’re going to be taking over what used to be Cafe Espresso?

It's an amazing space. It's in the food hall in the fruit 'n' veg and pantry hall which is a really striking room in itself. It's on a mezzanine level so you go up a few marble steps to get to us. I like it because it's one of the few restaurants [at Harrods] that's not counter service. It's very self-contained. What's really lovely about it is that we've changed the elevation slightly so when you’re sitting in Galvin Demoiselle you can look out over the Food Hall. There is a theatre to it - a lot of pomp and ceremony to Harrods’ service and the way the staff are dressed so it's nice to sit somewhere looking out to what's going on.

And you’ll be Patron?

We’ll have probably about 60 covers  and will be open from 10am to 8pm so for my lifestyle it suits as I've got a family. That’s what appealed to me, that it was a boutique-style cafe - rather than a huge sprawling restaurant. When it came in, Chris and Jeff were all excited about doing it and I nudged them out of the way a bit.

How did you come up with the menu for Galvin Demoiselle – how will it differ from say Galvin a Vin or the Bistrot?

It's not going to be what we'd do in our other restaurants  - your main point of being in Harrods is to shop. It's not your usual gastronomic restaurant experience. We've given a lot of thought to what you might want to eat when you're out shopping. And that's where I come into it - as I'm obviously the expert on shopping out of the three of us!

So you're the muse for the menu?

Oh I love that - I'm going to say that to Chris. But yes, I think that's fair to say.

What kind of dishes can we expect to see?

Well there’s a signature dish we’re very excited about - a warm lobster fishcake with lime vinaigrette and a bit of ginger in there. There’ll also be a soup du jour - if you come on a Monday you can have broad bean and smoked duck soup, on Tuesday there's a potage of mussels and curried spices, or you could just have a soup de poisson with gruyere on a Thursday. There's a few meat and poultry cocottes - a lovely confit of pork cheeks with pommes mousseline or a slow cooked Cornish lamb with apricots, almonds and couscous. And we've got salads on there and some really good quality charcuterie.

If you just want to come for one course, you can - I love that whole thing of an omelette and a glass of wine, that simplicity. I think it would be fantastic for people to pop in for just one dish and a lovely glass of wine.

Galvin Demoiselle will be the first of your restaurants to do breakfast.

Yes, it's not a big breakfast - mainly croissants, tartine au beurre and something like a brioche Lyonnaise - quite basic. We've taken advice from Harrods that most people at that time just want to come for a coffee and something very light - not the Full English.

And how often will the menu change?

It won't change as it does in our other restaurants which are very market-driven. At Harrods everything has to be very well planned out in advance and your menus are printed every few months. I think we'll just have a Spring, Summer, Autumn and Winter menus - like the fashion seasons.

Who will be in the kitchens?

We're bringing in two chefs who've been with us for a very long time. And Chris and Jeff have spent hours and hours in the kitchens at Harrods training their chefs. They've got huge kitchens there - I was absolutely staggered. There's a whole world in their basement that you didn't know existed. I don't know whether it's true but it's said it's that there's as many floors below as there are above street level. They've got roads - like Coldstore Avenue - it's absolutely incredible, a subterranean metropolis. But Chris and Jeff will be there a lot - they won't be able to stay away.

And front of house?

Tom Parker Bowles paid us a lovely compliment when he told us that what he really loved about our restaurants is that they all feel grand and special but equally you always feel relaxed when you're in them.

The front of house team have all been [at Harrods] for a very long time. I've spent a lot of time with them, they've been coming and eating at our restaurants. I've arranged what I call The Galvin Knowledge so that they become more, not Galvinised, just more initiated into the way we like to do things.

Tom Parker Bowles paid us a lovely compliment when he told us that what he really loved about our restaurants is that they all feel grand and special but equally you always feel relaxed when you're in them. I put that down to our front of house staff. There are a few things we like - calm, character and charm. Fred at Windows is a great example of that. We have quite specific standards, but we also want a bit of flair and personality.

It sounds like 2012’s going to be an exciting year for Galvin – is that all part of a grand plan?

We never think about things like that - the way our company has grown has been really organic. The more you do, the more people see what you're capable of. When we went into the Bistro, four restaurants had failed on that site. Some big names as well. I won't embarrass them by naming them. But we had no money; Chris and Jeff wanted their own restaurant and overnight it was a success. I think that got the ball rolling - when people saw we could make that work, someone quickly approached us about Galvin at Windows. Then it was quiet for a while which helped us consolidate what we had.

Each of our restaurants is unique in their own way and that's why I like to say we've got a collection of restaurants rather than a chain or brand. We get offered a lot and turn down a lot. We only say that we'll do something where we feel we can make a real difference.

I find the whole process of putting together restaurants fascinating. From that embryo of an idea to when you're in a restaurant that you've created - it's very stressful but there's a huge sense of achievement.