Talking to Jun Tanaka about Street Kitchen in the City, Battersea and more... 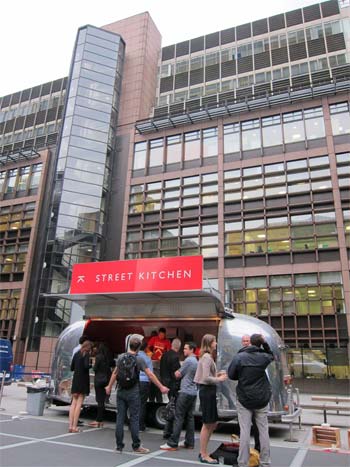 Jun Tanaka is famed from appearances on Satruday Kitchen and as Head Chef of Pearl restaurant in Holborn.  But it's the success of the Street Kitchen initiative with Mark Jankel that has recently gained them both further plaudits - serving well-sourced high-class cooking from their trailer. We caught up with him to find out how it's been going and what's next for the Kitchen.

How did you approach your training as a chef?

I'd basically screwed up my whole education. I loved school but hadn't done well academically, and needed to do something with my life. I loved cooking and was really specific in my approach - I wanted a perfect CV, full of top starred Michelin restaurants. I got to know the masters and made a list before approaching them.

20 years ago, all the top restaurants were French - there was no widespread gastronomic Indian, Chinese or Italian - at least not on a wide scale, so my training naturally focused on French cuisine.

How did your early career affect the kind of chef you wanted to be?

My very first day at Gavroche I was blown out of the water by the level of cooking and dedication. It was a huge shock to my system. I remember asking at one point 'When does the next shift come in?' being told 'we're it'!

People are often looking for fusion in your menus because of your Japanese heritage. Does that annoy you?

I make classically French food, not fusion. People are just looking for Japanese elements where they don't exist. Recently a food writer from abroad tried a bone marrow dish with beef cheeks, and congratulated me on the Japanese twist. It turned out the croquettes had a square shape, which reminded her of traditional Japanese sweets - pretty flimsy.

What's the difference between your TV chef persona and the chef in the kitchen?

I see the TV career as an add-on to life in the kitchen. It's a nice break which keeps you fresh - you can get tunnel vision, and it's important not to slow your creativity. TV is one of the quickest ways to communicate your style of food, but I don't want to be one of those chefs that spends so much time on it that I'm never in the kitchen. It's important to keep a balance. If you step out of the kitchen for too long you lose your skills.

Are there any TV chefs whose careers you'd want to avoid?

How's Street Kitchen being received in the city?

City workers are loving it! We were surprised by how health conscious they all are - both women and men are looking for something light, fresh and salady for lunch. We don't market ourselves as a healthy lunch, but we do use organic produce, which people associate with healthy food. We're selling out at the end of every week.

Realistically, we're never going to be a threat to Pret A Manger, but we'd like to be.

Street Kitchen is one of a few vendors invigorating the London street food scene. How are you seeing the scene evolve?

People are really embracing this new concept, particularly when the sun's out, and predictably restaurants are jumping on the bandwagon. We were pretty amused to see Wahaca's 'Mexican Street Kitchen' truck - remind you of anything?

We did a lot of research in LA and New York, and checked out a lot of different trucks - from dim sum to schnitzel trucks. Street food needs to be easy to eat with one hand, and focus on fresh, seasonal ingredients, so we took the best of the best.

What's next for Street Kitchen?

We'll be opening in Battersea soon. It's a great setup, with a secret hatch inside a warehouse. The production kitchen is behind the hatch, which is covered in neon lights - it'll feel like you've discovered something.

What was the last great meal you had?

I always rely on standards like Le Petit Maison in Mayfair and Dinings in Marylebone - I love it there. I've also been going to HK Diner for years - they serve until 4am and there's two separate menus, one for Westerners and one more authentic. The food is so good you could add a sprig of cress and call it gastronomic cuisine.

Street Kitchen can currently be found at Broadgate, with the Battersea hatch due to open soon.  Find out more.

And read our Test Drive of Street Kitchen in Broadgate.