[SIGPLUS_EXCEPTION_SOURCE] Image source is expected to be a full URL or a path relative to the image base folder specified in the back-end but /features/2011/hawksmoor/gallery is neither a URL nor a relative path to an existing file or folder.
0
Shares

Raising the steaks - talking to Huw Gott and Will Beckett, the people behind Hawksmoor

With a successful cook book under their belts, and a third City location added to their ever-expanding stable, the future's looking pretty bright for childhood friends-turned-restaurant-partners Huw Gott and Will Beckett. We caught up with them at their new Guildhall restaurant over breakfast to find out more about their partnership, new ventures and selling the sizzle as well as the steak. 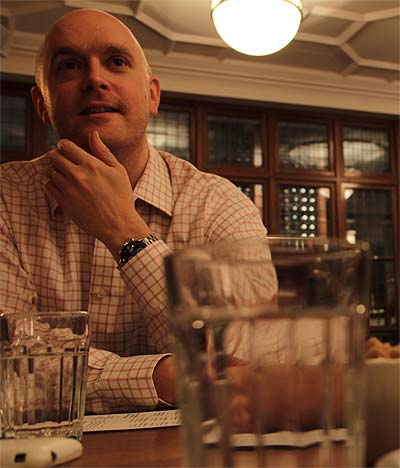 You're one of the most successful partnerships in the London restaurant scenes - how has your relationship developed?

Will Beckett: We've known each other since we were 11, and in our early 20s we lived together. We were single and had the same set of friends - so we pretty much spent every waking hour together. Since we created Hawksmoor, our working relationship has taken precedence - we're both married and we live in different parts of town, so we're business partners first - but it works.

Huw Gott: We both grew up eating good food, so it was always naturally a part of our relationship. My great grandparents were butchers and my parents have a cafe, and Will's mum was a food and wine journalist so he was used to fancy places from a young age.

How do you split up the roles behind running the Hawksmoor brand?

W: It really helps that we're totally different. Huw is creative and a perfectionist - he's constantly tweaking small details - but isn't organised about the bigger stuff. I naturally like to make lists and get stuff done, so I gravitate towards the business side.

H: By chance, we were naturally drawn towards different parts of the business. I get obsessive about working on the food and the interiors, while Will manages people and the business side - luckily, as neither of us really showed an aptitude for numbers early on!

How did you work together to make the Guildhall branch distinct to the other restaurants?

W: It's always important to us to stay relevant to the building. We definitely shared an aesthetic of how we wanted the design to reflect the heritage of the space I love our private room here - it's like an old bank boardroom. When it comes to small touches like light fittings, table levels and making sure the dining experience is everything we want it to be, Huw loves that stuff. I get bored easily and want to get stuff done in a hurry.

H: Working on the interior was a really detailed process. We trawled salvage yards to pick up the right lights and fittings - the specimen cabinet doors are from the Natural History museum, while the glass doors are from a University arts building. Authenticity was so important - we didn't want it to be a theme park.

What happened with the recent kitchen fire during Guildhall's soft opening?

W: We have a fire-charcoal grill in the kitchen which we inherited from Spitalfields to make sure we could reproduce the exact processes for some of our established dishes. The back of the grill reached about 500 degrees, and it didn't work with holes that had been drilled for shelves. We evacuated and called the fire brigade - we were only shut for 48 hours and we had to cancel over 300 diners, but better safe than sorry.

How have you seen the British steak restaurant industry change since you first got started?

W: When we got started, I'd say there were only a few high-profile steak restaurants on the map - including Gaucho and us. We always said that we wanted to create the kind of steak that felt right for people that grew up here. When we were kids, our meat was local - before that was such a buzz word - organic and grass-fed. We wanted to create food that tastes how your inner child imagines it would be.

H: The boom in steak restaurants recently is good for us - it keeps us on our toes.

Do you take inspiration from the US steak industry or is it a uniquely British take on food history?

W: In reality it's a bit of both. In our private room, there's a picture of Dolly, the owner of the UK's first steakhouse right around the corner. People do associate it naturally with the States - and we've certainly visited the US for inspiration - but in reality we're looking to British tastes more than American.

H: I'd say the steakhouse has its spiritual home in the States, and we've incorporated uniquely American dishes like creamed spinach and the lobster roll. I really enjoyed my lobster research in Maine! Overall I'd say that the States prefer their meat softer and richer, whereas we've focused more on taste than texture. The Japanese too are almost religious about butter-soft meat I want a bit of chew - there's something really primal about biting into steak. 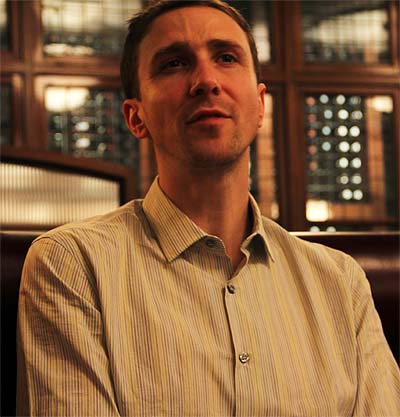 How do you go through the process of tasting and testing as you add to the menu?

H: We do tend to be a bit obsessive. We recently tasted six different varieties of onion rings - bread crumbs vs. batter vs. beef dripping and more, while a member of the team came up with the idea of brandy on top of our sticky toffee pudding to cut through the sweetness.

Ultimately, we're not trying to push boundaries. Our food doesn't take itself too seriously.

W: It's bizarrely hard to do simple things well

Have the Hawksmoor branches been packed as the weather cools?

W: There's absolutely more demand than we can cope for. Every week we do 4,000 covers - not including Guildhall - and we turn away another 2,000.

So what's next for the brand?

W: It's strange to think of us as a brand, and not just two friends opening nice restaurants.

H: We're at a critical point - we're conscious that other restaurants have messed up as they've got bigger. Our approach will stay local and proprietorial - whatever the next products are.

Where would you recommend steak in London for the people you have to turn away - or elsewhere in the world?

W: Obviously, I'd love people to keep trying! But outside of Hawksmoor, I'd say Goodman is a strong choice.

H: Outside of the UK, I've had a great steak at the Minetta Tavern in New York. The Asador Etxebarri in the Basque is amazing. The guy has created his own grill and makes his own charcoal, and he uses older animals of 10-12 years. It's a misunderstood part of steak lore - old animals aren't only good for braising.

Inside of the UK I went to Great Queen Street almost every day for lunch when we were opening Seven Dials - it doesn't have steak every day, but they source and cook their meat well. I also like the Anchor and Hope and St John.

Where else in London have you had great meals recently?

W: My wife is Spanish, so we're constantly on the search for great tapas - she loves Jose in Bremondsey. Other than that I love Zucca, Locanda Locatelli and Opera Tavern for the Iberico burger! Hedone is also top of my list to try out.

H: The Petersham Nurseries is one of our favourite treat places - and they let dogs in!

Find out more about the Hawksmoor Guildhall beef tasting menu.