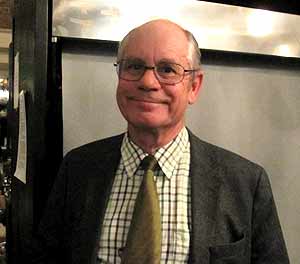 Simon Hoggart has worked for the Guardian since the 1960s. He became the wine writer for The Spectator in 2001, when he succeeded Auberon Waugh in the position. The title’s then–owner Conrad Black, when he heard of Hoggart’s appointment, asked why they’d hired  ‘a communist’  as wine correspondent. But he was assured by the Spectator’s business manager that  ‘Simon won’t only write about red wine’. Hot Dinners caught up with him at the launch of his latest book Life’s Too Short To Drink Bad Wine to glean a few pointers on ordering wine in restaurants.

Are there any hard and fast rules on ordering wine when eating out? Or should we throw them all out?

I think they should all be broken. The problem is when you’re a wine writer you know what they cost retail and they’re very, very expensive because restaurants need to make their money on the mark-up and you know it’s going to be three times retail and possibly four times what the restaurant paid. It really gets my gastric juices rumbling, not in a good way, when I see a wine I know is a good wine but is on sale at £6.95 in a shop and they’re trying to get £23 for it.

People often think they shouldn’t order the house wine, but rather the next one up on the list.

Which restaurant’s wine lists do you rate?
The trouble is when I go to a restaurant with a really great wine list, I see they’re selling wine for £39 that I know perfectly well I can get from Oddbins for £10. So I don’t really look for the wine list, which sounds a bit odd for a wine writer. But I tend to think I could buy four bottle for that price and be at home enjoying my wife’s cooking.  If you’re being taken out, that’s a different story. For example, I was taken to Zuma by a wine merchant who ordered Kobe beef with a bottle of Cote Rotie, well you don’t get Cote Roti for less than £30 in Threshers – if they sold it – so goodness knows what he paid, so that was a memorable pairing.

Well the Tate Gallery restaurant still has a very good wine list. They used to sell the wines  - before they cottoned on - at a mark-up based on what they paid for them. Ten or 20 years ago in my day job as a political writer I would go with a colleague and we would take out senior politicians, members of the cabinet, and we could order Chateau Haut Brion in a magnum for a price that Guardian expenses would cover. But the wine and food is still pretty good there.

Simon Hoggart's book - Life's Too Short To Drink Bad Wine: 100 wines for the discerning drinker is out now.