We talk to restaurateur Sam Hart 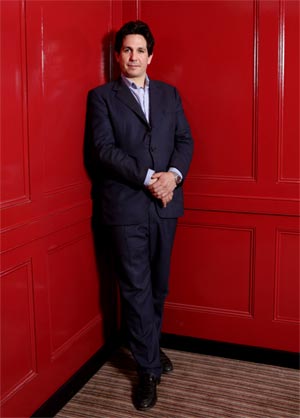 Sam Hart at Quo Vadis
With three hugely successful London restaurants under their belt, the Hart brothers, Sam and Eddie, are the textbook cases on how to launch, relauch and revamp restaurants for the discriminating London market. Hot Dinners caught up with Sam for a chat about the elusive magic that keeps diners coming back to them and to find out why now is the best time to be thinking about opening a restaurant in London.

Hot Dinners: You started out in finance didn’t you? Was it inevitable, given your family connections (Dad Tim owns Harts restaurant in Nottingham and Hambleton Hall in Rutland) that you would end up in the restaurant business?

Sam Hart: I always said I wasn’t going to – my Dad was in the restaurant business and I’d seen him in action and vowed I wasn’t going to have anything to do with it. It seemed like lots of hard work for little return. It was a gradual slide for me. I went to Mexico and ended up liking it but not enjoying money broking. So I opened a nightclub and cocktail bar in Mexico City.  It was only a small step from there to opening a restaurant.

HD: So where did the passion for Spanish food come from?

SH: When I left Mexico, I stopped off in Spain for six months. The idea was to do another nightclub in Barcelona. We got to Barcelona and it became clear that that would be impossible and having got used to living in the daytime, the idea of  going back into nightlife seemed very unappealing, so that was scrapped. But in the meantime I’d fallen in love with Spanish food and got the inspiration to open Fino.

HD: Was it hard persuading your brother to work with you?

SH: He’s always wanted to go into business with me and do a restaurant. He went straight from school to working for my dad in the restaurant industry, so he’d chosen that career from a very early age.

HD: Were you surprised when Fino was such a success?

SH: We were foolishly confident because we’d never done a restaurant. It was a very ambitious opening – we were quite young with very little experience. But obviously we wouldn’t have put our houses and money on the line if we hadn’t thought it was going to work. If you’re going to borrow £1m, guaranteed against your house, you’ve got to be pretty confident it’s going to be a success otherwise you wouldn’t do it.  At that time there wasn’t any tapas in London that was good quality – there was a gap in the market. We had a good idea, a good chef and a nice venue – the ingredients that make a good restaurant were all there. But with hindsight, we shouldn’t have been so confident. I’d be much more aware now of potential for disasters.

Opening a restaurant is a touch and go business always. Restaurants are very fragile things. The difference between success and failure is on a knife edge. We had never worked with our chef before so we didn’t really know whether he was going to be any good or not. As it turned out, he was brilliant but that was a bit of a fluke. 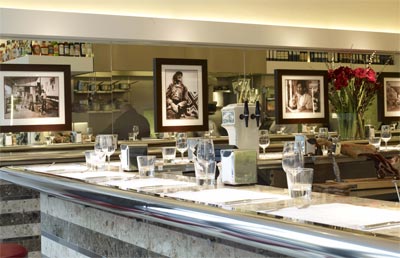 Barrafina
HD: What’s the hardest thing for restaurateurs to get right?

SH: I think the most difficult thing is the magic and atmosphere. You can have a restaurant that looks nice and has good service which lacks the magic ingredient that makes people want to go back. It’s very difficult to know how something is going to be before it’s finished.

If you walk into the Wolseley, say, it’s got the most amazing, magic atmosphere that makes people want to go back – which is actually probably more important in a restaurant than the actual quality of the food or the service.

If it’s really fun people will forgive quite a lot.

HD: Do you have a favourite London restaurant (apart from your own)?

SH: I have a slew of London restaurants that I like. St John is my favourite and the River Cafe. They’re both ingredients-led simple cooking, relatively relaxed in terms of formality  - and they’re very foodie focused.

HD: What’s the best and worst thing about working with your brother?

SH: The best thing is that you come from the same stable; we have very similar idea of what we like, so that is incredibly helpful to have that joint understanding.  I suppose you could say the downside is that there isn’t that fresh blood or creativity that there might be if you working with someone who wasn’t your brother.

HD: Des Gunewardera, chairman of D&D restaurants said this week he’s seeing an improvement in number of people eating out? Are you finding the same for your restaurants?

SH: It’s difficult to measure these things. Barrafina has never seen a downturn. With Fino the reopening figures are pretty good, so because it’s had a launch and reviews recently it’s hard to separate that out of the market trend. Quo Vadis has only been open for 11 months, so it’s got no history. My inkling is, when we look at future bookings, that there might be a cause for optimism with things getting slightly better.

HD: So is it still just as hard to get a table at Quo Vadis?

SH: It’s not as difficult now, which is really a good thing. We don’t want to have a restaurant that you can’t get into. If you book ages in advance, you have very high expectations which are tough to fulfil. So it’s much better to have someone think they’d like to come to Quo Vadis today and they just ring up and book and come and have a nice time. You could get in now for tonight (Hot Dinners spoke to Sam at 11 on a Friday morning), but we will be full by the time we get to 8-o’clock. The difference is that when it’s really good you’re full on Monday night and you’re full on Monday lunch and at 6 and 10. In this sort of climate, there’s much more openings at those times than there used to be. 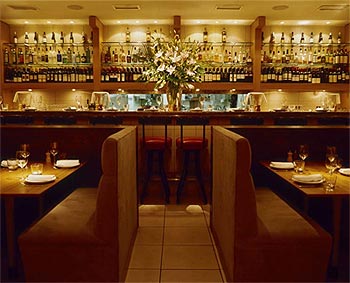 SH: We’ve three restaurants - small, medium and large - and that keeps us pretty busy. We don’t really have the inclination for more openings at the moment. We like to be hands-on. What we find is that with three restaurants of this sort of nature and scale, we’ve got a pretty busy and fulfilled life.

HD: Is the current economic climate putting you off at all?

SH: If I had the money and the time it would be a great time to open restaurants.  It takes a year from conception to opening day and for the first time since I’ve been in London there’s amazing property opportunities around for people with cash and good ideas. There’s more opportunity now than I’ve ever seen. If you started planning a restaurant now, you’d be opening this time next year, so it would be absolutely perfect. We’ve got enough on our plate. Trying to borrow the money would be difficult – but if you can get finance privately, then it’s a great time.

Click on each restaurant name to find out what the critics thought of Fino, Barrafina and Quo Vadis.