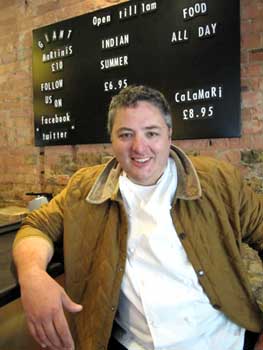 Hot Dinners caught up with Richard Corrigan at a recent London bash and asked the chef-proprietor of Corrigans Mayfair how life was treating him.

So you’ve just done well in the new Harden's Guide (highest placing for an newly-opened restaurant) – are you pleased?

After me kicking them out of my restaurant?  Myself and Harden's have never got on since 1981 when they founded the guide.  Everyone is entitled to say what they want. I always think the critics are like eunuchs in a harem really. They know how it’s done, they’ve seen it done everyday, but they’re unable to do it themselves.

Why did you decide to get involved in the London Restaurant Festival ?
Simon and Fay asked me at an initial stage if I’d get involved and I thought ‘why not?’ you know? Anything that lets London know about our restaurant scene is a good thing for restaurants in London. I like the whole idea.  I think Taste of London has always been very successful and very big, but something like this will be a little more intimate and tailored to each restaurant.

You’ve opened two restaurants this year (Corrigan’s Mayfair and Bentleys Dublin). What are you working on now?
I’m working on staying alive! My Mayfair restaurant was planned two years ago – it just happened there was a recession when I opened. It wasn’t planned – it’s cool. It’s a long project – you get over the first year. Everyone comes to have a look then you start building your real base of customers. That’s what I always do.  To open two restaurants in a recession and keep them busy and successful – it’s been an amazing achievement really.

So you’re not thinking of opening any new restaurants in the near future?
God almighty, no! I’m looking forward to building my restaurant in Mayfair into a really great place and it takes years to do that. So if anything, I’m having less distractions now than I did before.

We’ve spoken to a number of restaurateurs who believe we’ve seen the worst of the recession. Do you agree?
I think we probably have still a tough eight or nine months ahead.

Is London’s restaurant scene truly worthy of celebration?
I go to New York and where would you want to eat – Paris, Rome or London? I’m sorry – London is the more exciting place. My four cappuccinos in Rome for 50 euros – it’s still ringing in my ears. People talk about London being expensive – I mean, give me a break!