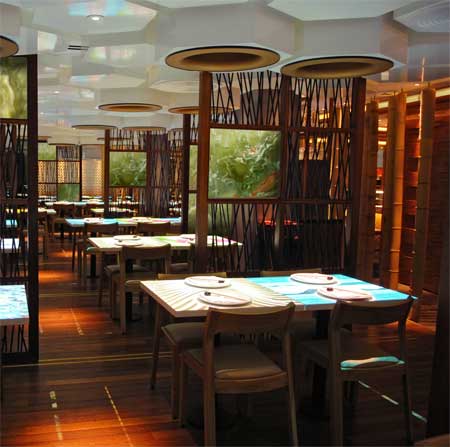 Just how do you sell a brand new dining concept to Londoners? With hi-tech touch tables, waiterless ordering and beamed images, Danny Potter and Noel Hunwick have done just that with their innovative Asian fusion brand Inamo.

Meeting at Oxford university, Noel and co-creator Daniel set up Inamo in 2008, blending a joint love of technology with a frustration at inept service. We caught up with Noel to talk about clicks, dishes and more as he celebrated the addition of Regent’s Street Inamo St James to their growing stable (and find out what we thought of our visit here).

What was the inspiration behind Inamo’s unique service style?

Danny (co-founder) and I were at a friend’s birthday at Pizza Express soon after graduating and weighing up different job opportunities when we realised we just couldn’t get the waiter’s attention to get our bill and leave.  We realised that once you’d been served with your food, you really became a second priority – unless the restaurant wants your table back, you’re essentially forgotten about. We thought we could take this problem and solve it, while adding a lot of theatre and charm to the experience.

What difference were you hoping to make for diners?

We wanted to give customers the control back over their meals – but also wanted them to be able to customise their experience, by changing the interactive tablecloth, checking out what’s going on in the kitchen or getting a hint of what’s about to be served to them with images of the food. Ultimately it’s a new technology that provides an old pleasure – a sense of theatre.

Was your initial inspiration all about the service and experience, or were you motivated by the menu?

With any restaurant, of course, the food is king. We realised that, no matter how good the concept, the quality of food needed to back it up. People will only come so many times for a novel experience – for return custom we needed to make sure that the food quality was high, so we focused on getting good chefs on board. Danny is a huge fan of Japanese food, and regularly eats at places like Nobu and Roka, and we felt it married well with the concept as we serve food as it's ready in a family style. Many people think our concept came from Japan, even though we created it ourselves

We were trying to create a new direction in food service – it was a brave move as no-one had really introduced the interactive ordering concept to London before.

Although it’s something that’s grown a lot, I don’t think that interactive ordering will wipe out traditional service. I still like to go to places with fawning French waiters from time to time!

How do you respond to people who say that the personal connection is missing from the Inamo brand? How do you make sure that people still have a connection with their servers?

While the system allows us to reduce staff costs, it also frees the waiter up to be more sociable and observant on the floor. Because they’re not taking the order or processing the bill, we tell staff they should be aware of the floor and notice things like people looking for their attention to explain a dish or for trouble with their order or bill. I don’t think it removes the human element as much as people think.

Was incorporating a strong cocktail menu important to you?

I love the bar at our first restaurant – it’s a cosy basement bar – but it was particularly important for us to showcase strong cocktails at our second location. We wanted the bar to be the heartbeat of the restaurant – we made it striking with a backlit design, so it makes quite a visual impact and the cocktail menu needed to match. We put a lot of time into the creation of the house cocktails – I love our Geisha cocktail (even though it’s not the most masculine drink!) and the Inamo house cocktail with spring onions, mandarin orange and chilli. It’s a surprising drink – a bit of a Dr Pepper.

We have an application in process for a pizza restaurant, where you build your own pizza at the centre of the table -  a similar approach to Inamo when it comes to putting diners in control of the food they eat. We have two parallel businesses – our own restaurants within the Inamo brand, and the technology itself which is going to be opening soon in Rotterdam, amongst other destinations. We’re working with restaurants excited about licensing the technology and introducing interactive elements to their spaces.

What other meals have you enjoyed in London recently?

I tend to enjoy smaller, bizarre places. I recently tried out a Szechuan place called Chilli Cool, not far from King's Cross. It's like two disparate restaurants inside and serves traditional style Szechuan food at great cheap prices. I also like lurking around curry houses in Tooting Broadway where you pay around £9 per head for unbelievable amounts of food.

Read about our visit to Inamo here.