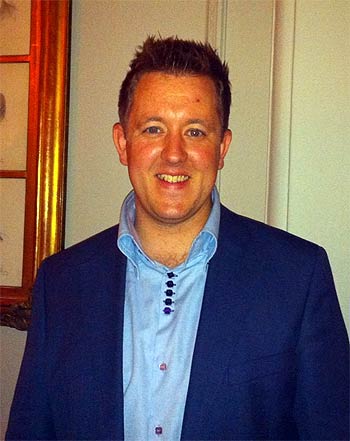 Ashley Palmer Watts has been working with Heston Blumenthal since he joined Heston's team at The Fat Duck in Bray back in 1999. He took just two years to make sous-chef and by 2003 was the restaurant's Head Chef. Now he's branching out, opening Heston's first London restaurant - Dinner by Heston Blumenthal - at the Mandarin Oriental in London's Knightsbridge in December. Hot Dinners got an exclusive insight into what we can expect from next year's most anticipated restaurant opening.

What can you tell us about Dinner by Heston Blumenthal?

Starting up a brand new restaurant is incredibly exciting for us. We've unearthed a load of new research - although research may be the wrong word as that sounds more clinical than it was. We looked at really old library books – the sort that are all wrapped up in a box where you have to be really careful with them. Reading these old things can really spark new ideas. But it's not new for new sake - it's like looking at a picture at an art gallery. It can spark an idea or it could be totally irrelevant.

How long has taken to come up with a menu?

I think the important thing is to have the menu to open with - then you make developments during the year and you also add things that are available seasonally. So you have the big seasonal changes to the menu then you have the small gradual individual changes as well.

What we try to do is create a framework for a particular dish and incorporate the small seasonal changes as they come along. With the big seasonal changes you start with other dishes adding diversity throughout the year.

So the menu will tumble through the seasons and I'm sure some old favorites will turn up too – we’ve got a couple planned.

How is Dinner by Heston Blumenthal going to differ to The Fat Duck?

It feels quite different from The Fat Duck in that it can take a very long time for new things to appear on the menu there.

For example, one of those things at The Fat Duck that was really quick to come up with was the snail porridge – it took about two weeks. Then the Black Forest gateaux took about a year and a half. So you never really know how long something new could take. When you think is going to be really very quick, it's often longer and when you think it's going to be really difficult, it comes very easily.

It sounds as thought the design ethos has been particularly well thought through.

I don’t think there are many times in your life you can do this. The designer of the restaurant, Adam D Tihany, is amazing. He has all the designs in his head like chefs deal with food. The key thing is that you give a project enough time. If you’re the designer that gives you the time to get inside Heston’s head and start to understand everything he’s done at The Fat Duck and The Hind’s Head. So he was able to understand what Heston’s food’s about  and got to know what we’re after. So we followed that from the mood board to the final design.

We worked with a cutlery supplier – William Welch from Studio Williams. We’ve been going through the whole process of plates and glasses, everything that you can possibly imagine.  While we don’t have the budget for the very best cutlery in the world, we said to him that we wanted to come up with a new meat knife – something that would go with the cutlery that we chose. So we went through the process of designing a completely new knife – they’re really cool.

And there’s a kitchen company called Bonnet that make ovens. Normally they have one big suite and everyone [in the kitchen] is shuffling past you. We thought, why don’t you just separate them out so that you have two suites with a path down the middle, with the fridges on the outside. So we’ve redesigned it in a very simple way that helps the kitchen process. The kitchen company believed that it still worked the other way but we feel it’s important to evolve.

At the end of the day, you’re simulating the service to the nth degree in your head – and hopefully we’ve thought of everything

How many will you be serving at the Mandarin Oriental compared to The Fat Duck?

And we heard that you were doing something special with the private dining room?

The private dining room is only for 10 people and has embossed red leather walls and electric blue felt chairs with distressed leather on the outside - it's stunning. There's an antique brass columned table with a wooden top - it's quite like the TV programme. It's quite bizarre but not in-your-face.

However we haven't decided quite what we're going to do in there yet. I think a lot of the more experimental stuff, the feast-inspired stuff may be in there but we have to think how we can recreate that on an ongoing basis.

There's a chef’s table as well which is going to be brilliant – right opposite the pass. We’ll serve maybe eight or nine courses there – smaller versions based on the menu at the time.

How does it feel to move away from The Fat Duck to opening your own restaurant?

It’s been a long process.  If I think back to the day when I was on the meat, fish and sauce section in 2002-2003, I loved that and I didn’t want to move. But Heston told me that I couldn’t just work there.  He told me;  “I want you to cover this person on his day off and then that person.”  I said I didn’t want to – I wanted to stay where I was. But he persisted – “No, no you have to do this, trust me.”

It’s also difficult because whenever you leave a position as I have done at The Fat Duck, you have to fill it.  You have to have 100% trust in your replacement when you move away.

Don’t get me wrong, it’s been a really hard process – and it doesn’t matter how long I’m gone for, I’m still going to be attached (to The Fat Duck) – you can’t undone what’s been done.  I was just talking to Johnny – who’s now the head chef of The Fat Duck – that you think about key moments in you career, key moments like this where you think “Oh my God, this is really happening!”

Pierre Koffmann (whose restaurant is across the road from the Mandarin Oriental) came up to me and said:  “If there’s anything you need, just call me.” I went to his restaurant when I was seventeen - it’s a pinch yourself moment. It’s getting a bit real now!

Do you miss The Fat Duck?

I’ve done the odd service every month and it’s lovely going back in – working with those people in that kitchen.

When you go back to somewhere like The Fat Duck kitchen, it’s tiny – really small.  But it’s the same for any 2-3 star Michelin restaurant - they’re like the Premier league and there’s 100% commitment.  When you’re there you take it for granted, but when you come back it’s amazing.

That was the worry for London – would I get the same feeling for the people in the kitchen? So Simon (who runs the front of house of The Fat Duck) and I said to the manager of the Mandarin Oriental that we wanted to see every single person coming to work in the restaurant. When you meet them, you can gauge whether you’ll be able to work with them or not.  I would say that if I had 50% of the staff with the personality I wanted, then I would have been happy.  But I would have employed every single one of the new staff for The Fat Duck.    They’ve been unbelievable. I haven’t worked with them yet, though!

So what else have you been doing over the past few months?

It’s been a long process but there have been really key things in the move away from The Duck. I’ve had to pull myself back. Johnny and I speak every day and he talks to me if there are any problems – but I don’t get too involved.  We also had The Fat Duck cook book and that took a long time to do – we did it in my garage.  And then we had the Little Chef which took up six months.

We have The Hind’s Head and The Crown too. The Crown has had a very understated opening – we just took it over and wanted it to remain the village pub and make that quite clear.

Without those things it would have been really difficult.