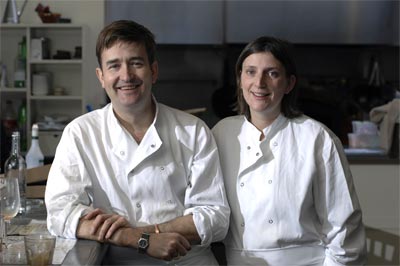 Husband and wife team Sam and Sam Clark opened Moro on London's Exmouth Market back in 1997 and it's since become one of those cornerstone London restaurants, like St John, that everyone loves.

Ever since we started asking foodie folk (and other well-known sorts) to tell us their favourite London restaurants, Moro has been popping up on those lists. Now it's the turn of the Clarks to tell us where they really rate in town.

"The cooking has great delicacy and flair."

Find out more about Dabbous.

"We remember eating Rose and Ruthie's croque monsieur there 25 years ago and today it's still as good as ever."

Find out more about The River Café

"We love sitting at the bar with the kids and eating some of the best pasta in London."