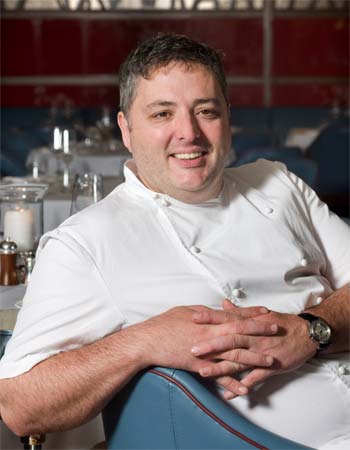 Richard Corrigan is a very familiar face to many, and his two London restaurants Corrigan's and Bentley's Oyster Bar and Grill are hugely popular. Now he's been the latest big name to be attracted to the Harrod's Food Hall to set up Bentley's Sea Grill - an outpost of the Mayfair restaurant deep in the heart of one of London's food institutions.

We caught up with him to find out more about the Sea Grill and also to find out where he likes eating out in town.

What can you tell us about the new Bentley's?

Bentley's is a very old fish tavern in London, that's remained consistent and we've transferred those traditions of hospitality to Harrods. We have a consistency that in the oyster bar that I think will do really well. And it's a sea grill mainly.

What should people be ordering?

Anything really. The whole point with this fish counter (points towards Harrod's own fish counter) is that customers can point at anything they want, that's just come straight out of a boat, and say I would like that cooked for me on the grill.

So you can sit down, look at the menu and decide "I don't want anything from here, I want something from (the fish counter)". You can cook it the way you want it. If you want a nice dressing on it, a salad with it, that's fine. It's all about the customer, about giving them what they want.

Who would have imagined all those years ago that here I am, nearly hitting my fifties, rolling on the years, that I would be here in Harrods? The whole Harrods team are great and have worked really hard to get this up and running and we've been here every day. It's much more than just an outlet to us. We have traditions and standards and we certainly want to transfer them here as well.

And, finally, what are your favourite restaurants in London right now?

"Right now I would have to say that I love this lovely little place, Hedone. I think it's fantastic. That in a bad chef's hands could be a disaster but they just have everything right. It's a nice environment, it's a very relaxed scenario, a bit hipsterish so you don't have to wear a tie. Being in that environment and eating that food - it's beautiful."

Find out more about Hedone.

"I like Hix, and I like this particularly because my kids like to go there. I hear all different things about Hix Belgravia but I ask my kids where they want to go and they keep consistently saying to me - Hix Belgravia. I normally go out with my kids, I don't normally go out on my own. One is 13, one is 17, and one is 23, but they all like it. It's interesting, it's intimate, it's easy and I just like Hix. We're obviously both in the business, there's a glass of shampoo waiting for me and its a nice hospitable thing. Mark has transformed that really well."

Find out more about Hix Belgravia

"This is the big luxury for myself and my wife - this is where we'd head and even more so when Silvano was there. This would be my luxury comfort evening, when I'm feeling flush and spoiling myself."

Find out more about Le Gavroche

Bentley's Sea Grill in Harrod's is open now in the Harrod's Food Hall.