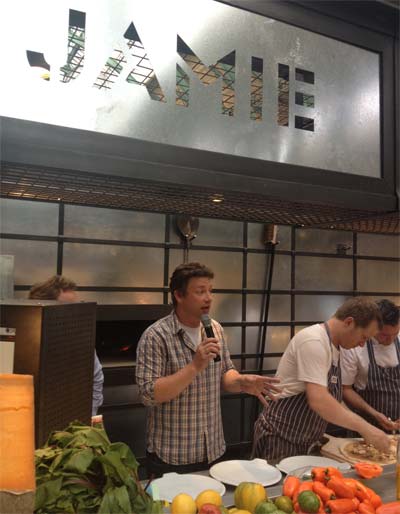 Jamie Oliver's a very busy man. Not content with having the biggest selling non-fiction book in the UK ever (30 Minute Meals, soon to be followed by its even speedier sequel - 15 Minute Meals), he's currently opening more Union Jacks throughout the country. This is his British flatbread restaurant (i.e. pizza) that he's created with Chris Bianco, US pizza supremo. Bianco aside, it's a heavily British venture, with UK producers pushed right to the forefront throughout the menu.

His latest addition to that part of his empire is taking prime position in the middle of the Covent Garden -  in the North Hall of the Market Building (where Canteen previously had a temporary restaurant). The upstairs section seats over 100 around an open kitchen, but we were most impressed by the downstairs area (referred to as "the dungeons") where you can get peace and quiet (and air-conditioning) away from the mad weekend crowds. It's well worth knowing the spot exists if you're in the area.

We caught up with Jamie at the launch to find out from him where he enjoys eating out when he's in London.

"There's a dude there called Jon Rotheram (St John Hotel Sous Chef) - a fucking lovely, talented boy  He's all the time in front of St John and their approach but with a more feminine, homely, graphic touch. Brilliant food."

"I went back to Moro recently and God I forgot how good they are. You go at lunchtime and it's just joyful. We had the most fantastic meal there from Sam & Sam Clark who I used to work with. They're lovely, clever and also take a lot of our students."

Find out more about Moro

"I love them - and I just love the dude who sits there playing the piano (mimics the motion of the ocakbasi chef twirling the kebabs). Their food is well sourced and the charcoal is amazing."

Find out more about Mangal